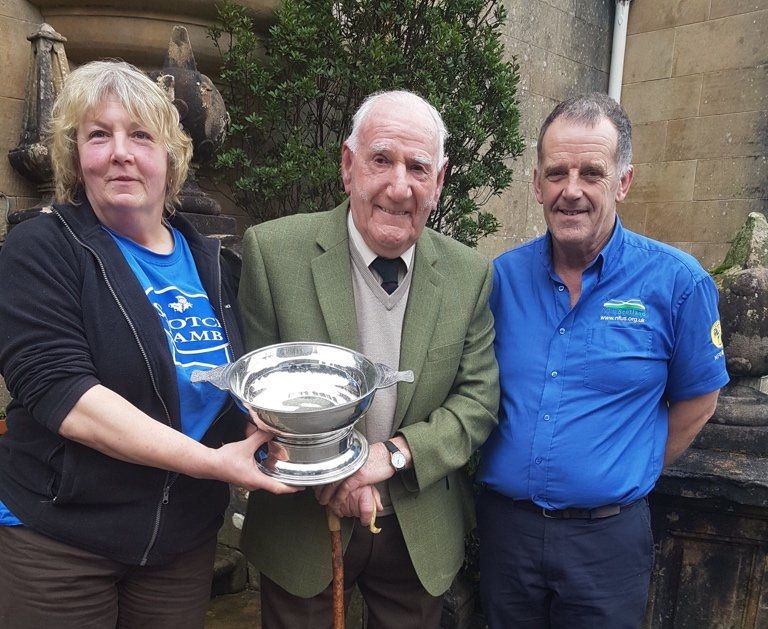 Although retired, Sandy keeps a daily routine that sees him check on ewes and hoggs while training and trialling his sheepdogs

A 94-year-old 'shepherding legend' has scooped an award dedicated to recognising farmers who make a significant contribution to farming in the Inner Hebrides.

Hill farmer Sandy McKirdy, from Dalmally in Bute, is this year’s recipient of the Stalwart award, presented annually by NFU Scotland.

The award was created in 2016 in recognition and memory two Inner Hebrides farmers, Bert Leitch and Lachlan MacLean, who passed away in 2015.

This year’s recipient, Sandy McKirdy, has been described by NFU Scotland as a 'legend in hill farming circles', having spent a lifetime working with Blackface sheep and sheepdogs.

He started farming with his father at Dunagoil Farm on Bute then going on to work as a shepherd, before spending almost 40 years shepherding for Bute Estates and the Marquis of Bute.

Although he retired at 65, Sandy keeps a daily routine that sees him check on ewes and hoggs while training and trialling his sheepdogs for the local trial, where continues to win prizes.

NFU Scotland's Argyll & the Islands Regional Chairman, John Dickson said: “Given that the award is in memory of Bert Leitch and Lachlan MacLean, it is fitting that it has gone to Sandy in recognition of his lifelong commitment to hill sheep farming.

“The true measure of someone considered a stalwart is the respect and admiration they get from young and old.

“The fact that Sandy’s advice and experience continue to be sought after and valued just underlines the esteem in which Sandy is held by his fellow farmers.”

In making the award, Sybil MacPherson said: “The definition of stalwart sums up Sandy perfectly, someone of outstanding strength and vigour of body, mind and spirit, loyal, reliable and hard working.

“Sandy is one of nature’s true gentlemen and an exceptional and inspirational character. Indeed, he is quite unique and held in the greatest respect by all who know him.

“Very few people, if any, will have spent over 80 years tending sheep. Fewer still will have his level of knowledge, interest, care and dedication, and none with the ability to ‘ken’ sheep like Sandy.

“There cannot be a worthier winner of the Argyll & the Islands Stalwart award and I am sure the late Lachlan and Bert, in whose memory this award is presented, would be in full agreement.”

The Stalwart award is presented annually to either a NFU Scotland member who has given their time to the work for the union in Argyll & the Islands or someone who has made a significant contribution to agriculture in the area.