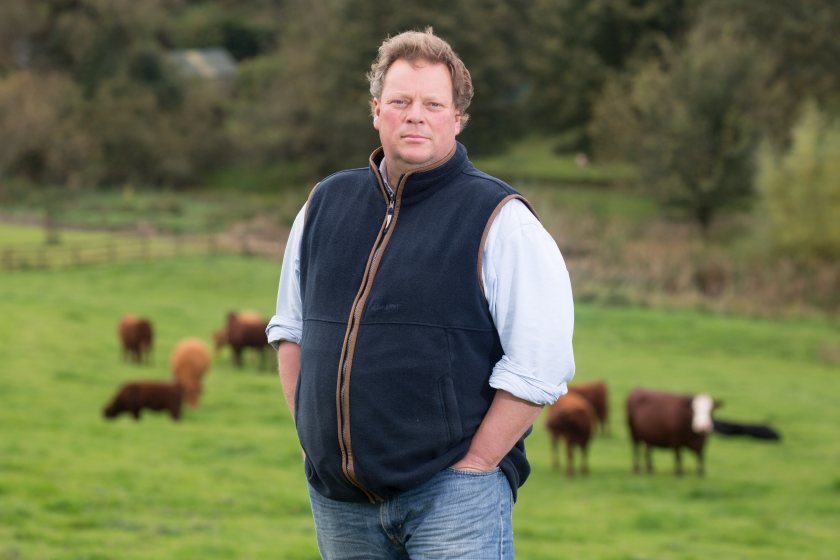 A Cotswolds farmer has improved the productivity of his animals whilst reducing costs and inputs after joining an industry project run by the AHDB.

David Barton, a beef producer near Cirencester, is like many livestock farmers of late – he’s been looking for ways to boost productivity whilst cutting costs.

Having joined AHDB’s Farm Excellence project as a Beef and Lamb Strategic Farmer in 2017, David is now coming to the end of the four-year programme.

During those four years, he has made significant changes to improve the efficiency of his farm business and reduce his carbon footprint.

The 103 ha Cotswold brash farm supports arable enterprises, alongside a herd of Saler X Sussex homebred cows with youngstock taken through to finish.

David used to describe himself as an arable farmer with beef animals, but is now a self-professed beef farmer with an environmental focus.

He has accomplished numerous marginal gains whilst being a Strategic Farmer, but the main changes made over the four years have focused on getting the most from forage to reduce feed and labour costs.

His 200 cattle are outdoors for most of the year, grazing some of the most beautiful hillsides in England.

Whilst working with specialist consultants, he has introduced a rotational grazing system to improve grass quality and quantity.

This system also helps to lock up carbon from the atmosphere - assisting the fight against climate change and supporting biodiversity.

David says: “Our permanent pasture is species-rich Cotswold limestone grassland. This is very valuable to the environment and is further enriched due to the way the cattle graze it – the importance of which is often underestimated.

“I knew I needed to concentrate on the utilisation of grass and I managed to achieve that through grass measuring using a plate meter, implementing rotational grazing and making better quality silage.

“The cost of baling and wrapping is a big expense despite whether the silage is good quality, so we wanted to make sure it was the best it could be. This improvement has yielded better growth performance from our weaned calves.

“If we were just set-stocking our fields, the grass doesn’t go through its growth cycles as vigorously compared to now, where the grazing platform is grazed, or cut for silage, up to six times each season.”

The whole process means the grass is sequestering carbon much more efficiently and putting it back into the ground.

David added: “This has also had a really positive effect on my business as last year, when we had the drought early on, the cattle had more grass in front of them compared to previous years because it was given the chance to rest.

“This year, I’ve been using a mixture of clover and herbal leys which will help me reduce the use of nitrogen fertiliser, reducing my costs even further.”

Focusing on nutrition has allowed David to improve cattle growth rates and improve finishing time to a minimum of 18 months, from up to 27 months which it was at the start of the project.

Reducing finishing age has not had a negative impact on carcase weights but inputs such as feed are less, which is good from an efficiency point of view and for the environment too, as the animals aren’t around for as long.

David has also carried out a carbon audit through AHDB’s Strategic Farm programme.

He explained: “It’s a good process as it makes you consider everything from the diesel you put in the tractor to the energy you use on the farm.

“The farm performed around 26% better than average which I’m pleased with, and it’s identified areas which can be improved.

“It’s also reassuring to know the steps I’ve taken are already having a positive impact on the environment.”