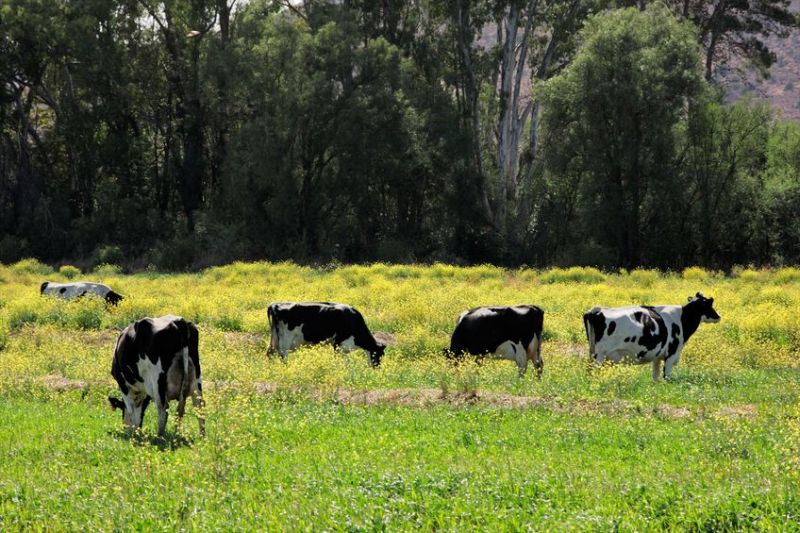 Drinking milk from cows in the UK uses 11 times less soya than consuming drinks made directly from soya, the study says

Cows' milk from grass-based systems is environmentally friendlier than plant-based alternatives because it uses far less soya, according to a new study.

It says vegans and others who buy milk substitutes made from soya for their latte and cappuccino, or breakfast cereal, are harming the planet.

The study, published in the Journal of Applied Animal Nutrition, says consumers' ever-increasing demand for soya meal and palm kernel meal is fuelling the destruction of rainforest.

The authors calculate that about 85 litres of milk is produced in the UK for every kilo of soya bean meal consumed by dairy cows.

In contrast, no more than 7.5 litres of soya drink are produced from a kilo of whole soya beans.

As a result, drinking milk from cows in the UK uses 11 times less soya than consuming drinks made directly from soya.

Use of soya could be cut still further if farmers used more alternative sources of protein and consumers actively sought milk produced from cows that graze grass.

In Europe as a whole, milk from cows is only 4 times more efficient than soya drinks in terms of soya use, the report says.

The use of concentrates is higher because grass is a less productive crop in many countries than in the UK.

The report was written by Prof Mike Wilkinson from Nottingham University and Richard Young of the Sustainable Food Trust (SFT).

SFT chief executive, Patrick Holden said it was an 'important study': "It shows that farmers could reduce their dependence on imported protein, which is produced at such a high environmental cost, and rely more on home produced feed.

"But it also shows that drinking cows’ milk uses far less soya than drinks made from soya, because most of the milk comes from grass.

"This highlights the importance of grass, a crop ideally suited to our climate and the grazing animals that turn it into high quality foods we can eat."