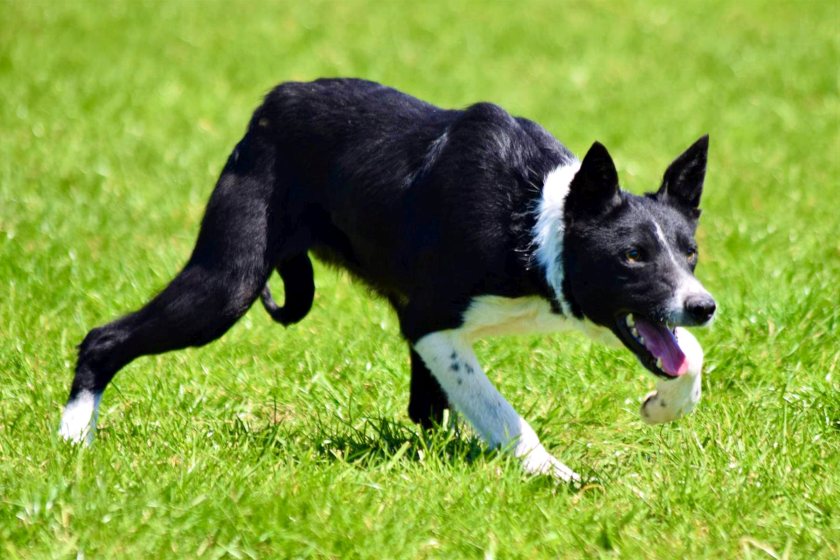 18-month-old black and white bitch, Aran Kate, is said to be an excellent prospect for nursery trials this year

Mr Jenkins, of Talybont, near Aberystwyth, arrived on Friday 20 May with a single entry, his 18-month-old black and white bitch, Aran Kate, said to be an excellent prospect for nursery trials this year.

She is another well-bred daughter of the Ceredigon handler’s main stud dog Jock, who finished eighth in this year’s Supreme and has been responsible for many top price Skipton-sold dogs at both live and online sales in recent years.

Jock was also the father of two 8,500gns dogs sold the previous weekend at Bala, his Skipton daughter, out of Rosewood Meg, from Alun Jones in North Wales, selling to an undisclosed Scottish buyer.

Travelling all the way down from near Inverness and making the journey well worthwhile when claiming second top call of 6,100gns (£6,405) was John Macinnes, of Westford, Alness, with his January, 2020, brown and white bitch, Vhairi.

By Upland Moss, out of Liz, from Derwent’s JD Wood, a bitch sold out of Skipton in 2019, the stylish two-year-old, a solid all-rounder, was the first dog ever to be sold at the North Yorkshire venue by Mr Macinnes, a dyed-in-the-wool Scottish Blackface sheep farmer and shepherd who, now aged 79, says this year’s crop of lambs will be the last he will ever sell as retirement finally beckons.

However, the former triallist will continue to bring on and improve working sheepdogs, having trained them for many years on behalf of other people. Vhairi returned to her place of origin when sold via a telephone bid by to a contract shepherd from Inverness.

Shaun Richards, who runs Pen-y-Borough Sheep Dogs - shaunrichardssheepdogs.co.uk - at the foot of Pen-y-Ghent in Eldroth, another local handler who has regularly figured among the top prices at Skipton, was represented by a brace of bitches, also running a third on behalf of his wife Sue, the trio netting 13,900gns (£14,595) in total.

First up and topping on price at 4,900gns was his main work dog, Ora, an experienced four-year-old black and white bitch by the home-bred Vic, himself a son of the breeder’s own Meg, whose own sire was Welshman Aled Owen’s renowned World Sheep Dog Trials champion Roy. Out of a well-proven dam, Rita, Ora joined familiar Skipton face Granville Fairburn, of Apperley Bridge, West Yorkshire.

Next up was Mrs Richards’ two-year-old black and white bitch Nell, a daughter of Hemp, from Shap’s Richard Harrison, out of North Craven-based David Farraday’s Tiny, who also sold well via an online bid of 4,600gns, travelling to Powys in Wales with Geraint Evans.

Mr Richards’ third dog was a newly broken October, 2020, black and white bitch, Liz, a home-bred out of Shaun’s own Pen-y-Borough Whizz, since sold locally to Tosside’s Clive Robinson, and a daughter of Dean Addison’s Elan Valley Roy. She completed a good day for the North Craven handler when going to Perthshire in Scotland with K Taylor & Sons, of Killin.

Welsh brothers Ross and Arran Games, from Talgarth in southern Powys, were both well represented with two fully broken dogs each.

The second runner for Ross, who works as an agricultural contractor and sheep shearer, and is a well-known triallist, having represented the Welsh national team, was a young improver, the November, 2020, black and white bitch, Jet, by JD Mills’ Venn Lock, out of R Edwards’ Pat. She commanded 3,900gns when catching the eye of Bangor’s M Jones.

The sale attracted a total entry of 44 dogs, with a solid clearance rate achieved.