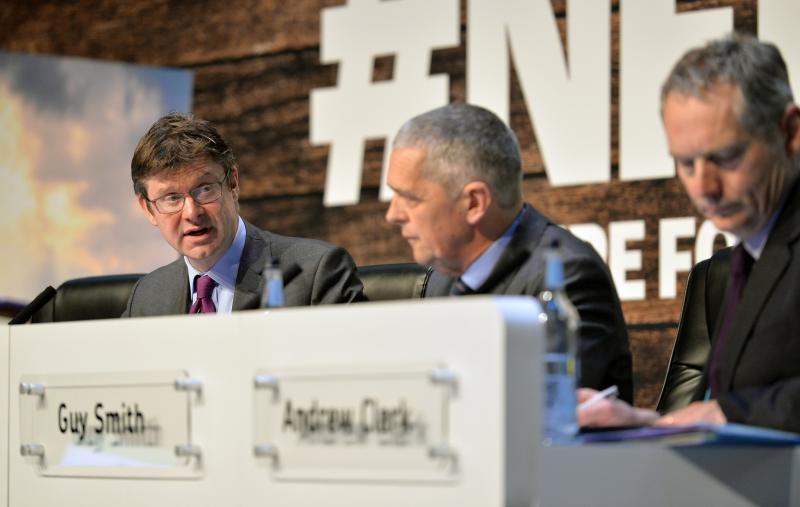 The Government has announced that it will invest £90 million in agricultural technology to boost the productivity of British farming.

Business Secretary Greg Clarke told delegates at the NFU's annual conference in Birmingham that since the mid-1990s productivity growth in UK agriculture and horticulture had lagged behind that of other countries.

It had grown at just one third of the rate of the United States and the Netherlands, said the Secretary of State, who pointed to a recent AHDB report that highlighted the productivity problems of British farming.

The report, which was covered in FarmingUK earlier this year, said that if the rate of growth had kept pace with the US since 2000, the contribution of UK farming to the rural economy would have been £4.3 billion higher by 2013.

Greg Clarke said that harnessing new technology could help improve productivity and he said the Government's £90 million funding would help to take new developments and inventions and put them to effective use on the land.

"In this country we have often been better at the invention and discovery of new ways of doing things than the implementation of them," he told farmers attending the NFU conference in Birmingham.

"The AHDB is right in saying that we need to put an increased emphasis on the D in R&D - the development half of research and development.

"As part of the industrial strategy, we announced a transforming food production challenge and I am delighted to announce today that the Government will invest £90 million to make this challenge a reality.

"It will include the creation of translation hubs that bring together farmers and growers, businesses, scientists, centres for agricultural innovation, to apply the latest research into farming practice. This should be a big boost to the knowledge exchange that already takes place across food and farming."

Greg Clarke is the minister responsible for developing the Government's industrial strategy. As the biggest manufacturing sector in the UK, food and farming has been included in this strategy.

He said the industrial strategy set out a ways to improve productivity in the UK.

He said: "It seems to me they are as relevant to this industry as to others." He said that agriculture was one of the most innovative sectors of the economy but the advantages of bringing together the country's best scientists and its most forward thinking producers was clear.

The new funding, which will be provided as part of the industrial strategy's challenge fund, will, he said, make it easier for food and agri-business to embrace technology and innovation.

He said it would be critical in meeting the increasing food demands of a growing population, fuel rural growth and create high skilled jobs.

The Secretary of State explained that, along with the introduction of new technology, would be a need for workers with the skills necessary to make use of this technology on the farm.

"With the technological revolution that is happening, it is vital, it seems to me, that the skills of the farming workforce need to keep pace. New technologies require new abilities."

He said today's farmer already had a "Swiss army knife of skills" - an engineer, an environmentalist, data scientist, bio-chemist, often an energy producer, tourism entrepreneur and always an investor.

All of these skills were "absolutely essential" in doing the farmer's job. But he said: "At the moment we under-invest in skills and training relative to many of our competitor countries.

"If we are to take advantage of the productivity improvements that new technology offers, we need to have tailored programmes of skills, education and training to meet the needs of this sector."

He said that the Government's industrial strategy was putting great emphasis on technical qualifications - T-Levels.

They would provide an important opportunity for a new generation to start their careers in agriculture with relevant skills.

He said the Government would work closely with the NFU in the design of the T-Levels to make them effective for farmers' needs.

He said that apprenticeships would also be crucial. "Our reforms to apprenticeships are intended to present high quality opportunities for individuals and employers alike."

The availability of high speed broadband was necessary for some of the new technologies that would transform agricultural productivity, and he said the industrial strategy was committing an extra £200 million of investment to the local broad fibre networks programme.

"I can't recall a single occasion on which I have met an NFU branch anywhere in the country in which the need for consistently better broadband and mobile coverage was not right at the top of the list of improvements that was wanted.

"It is imperative and it becomes more pressing because, if you take my invitation to join us in upgrading our level of technology, and especially the technology that relies on big data and artificial intelligence, well you can't do that without the connections that allow the transmission of large quantities of data. So it is becoming more important than ever," he said.

Defra Secretary Michael Gove has already suggested that improved productivity would be something the Government would seek to encourage in a reformed agricultural support scheme for the United Kingdom after the country left the EU.

The Secretary of State told delegates at the Oxford Farming Conference earlier this year that the Government wanted to incentivise farmers to "invest in more capital intensive and productive methods of producing food or processing food."

His Oxford speech coincided with publication of the AHDB report to which Greg Clarke referred during his NFU conference speech.

The report, produced by Tom Hind, chief strategy officer with AHDB, called on farmers and Government to work together to close the productivity gap on the country's competitors.

"Low productivity growth reduces our industry’s long-term ability to compete, grow new markets and improve our natural capital. Understanding what is holding us back and how we can solve the problems is critical to the success of our farmers, growers and food industry," said Tom Hind in the report.

He said that productivity growth was critically important. It played a significant part in the farming industry’s overall competitiveness, which was critical if the country wanted to operate in increasingly globalised markets.