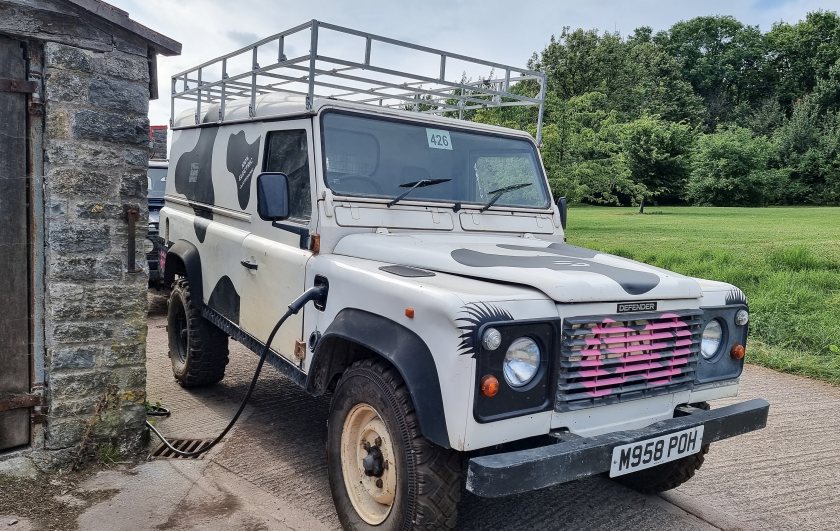 The kit - aimed at landowners and farmers - has been developed and extensively tested on Worthy Farm, host of Glastonbury Festival

A 'drop in' kit to convert working Land Rover Defenders to fully-electric power has been launched with a focus on the agricultural sector.

The conversion kit has been in development over the past 18 months on Worthy Farm, host to the Glastonbury Festival.

Designed by Electrogenic, an Oxford-based firm which develops technology to convert vehicles to all-electric, the kits are designed to be maintenance free.

An electric motor is bolted to the Defender’s existing clutch bell housing by a suitably qualified mechanic, so the vehicle keeps all its gears.

It packs 120 bhp and 235 Nm of torque – comparable power and torque to the original diesel engine.

And 52kWh of batteries mounted under the bonnet gives over 100 miles of range on-road and considerably more when driving off-road or around a farm.

As standard, the kit is equipped for 7.5kW AC overnight charging via a Type 2 connector. Faster charging can be specified as an optional extra.

According to the firm, the conversions retain the original Defender’s versatility and four-wheel-drive, while off-road ability is improved by the fitment of the electric motor.

Following tests of the electrified Defender alongside its diesel-powered counterpart, it is estimated that the electric version will save at least £6,000 in fuel costs over the course of an average year of on-farm use.

Steve Drummond, Electrogenic co-founder, said the new electric conversion kit aimed at farmers and landowners was an exciting development for the company.

"We do high-specification conversions for road-warriors, but this kit is all about giving landowners an economic, sustainable option," he said.

"It gives Land Rover Defenders – long a trusty workhorse for farms – an affordable new lease of life, reducing running costs while enhancing performance and driveability around the estate."

The kites were developed as part of a partnership between Electrogenic and automotive experts at Cardiff University.