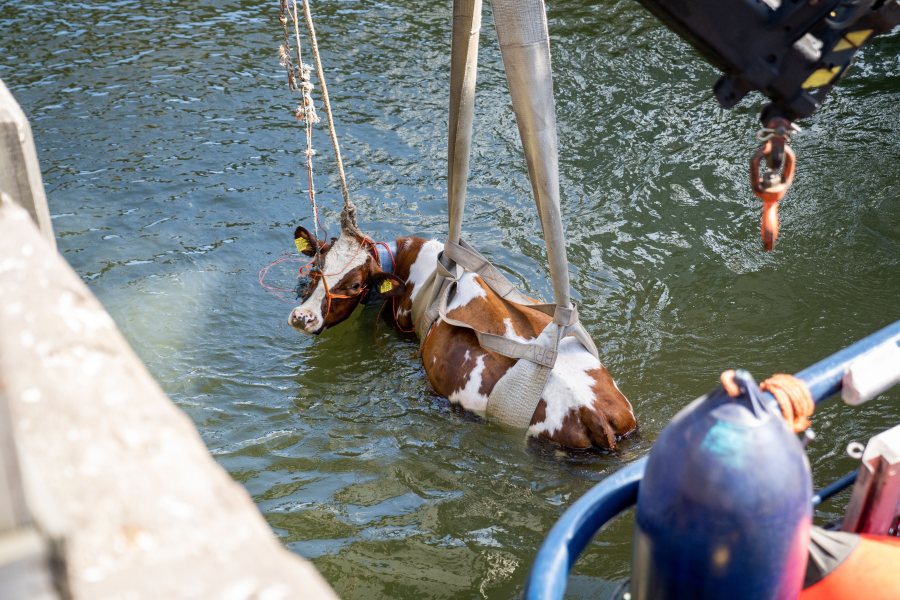 Some politicians are calling for the project to end following the incidents (Photo: Hollandse Hoogte/Shutterstock)

The urban farm project, which started producing dairy in 2019, has been labelled 'madness' by politicians from the PvdD party following the incidents.

Dozens of cows are situated on the farm as part of efforts to find new ways to feed a growing population despite decreasing amounts of space to grow food.

The companies behind the project want to establish whether it's possible for a city to become self-reliant in terms of food production, waste and power.

Each cow has around 160 square feet of space while being contained within a space 30–50 times smaller.

Currently, the floating farm produces various kinds of milk and yogurt from its location docked in the port of Rotterdam.

But two cows fell into the water last week, leading rescuers to winch the animals back to safety.

Ruud van der Velden, a councillor and head of the local branch of the PvdD, told DutchNews.nl that the project was a 'sorry sight'.

He had called for a debate in the city's council to withdraw the farm's permit, but the motion did not get a majority.

"It is dangerous when cows leave the pontoon for the gangway to go to the waterside and this is the second time that a cow has ended up in the water: the last was in December.

"On Tuesday there was another accident with a cow falling into the water, an animal of 600 to 800 kilos.

"The emergency services were called and it took them more than an hour to get it out of the water," he said.

The companies behind the project are Beladon, a firm that specialises in waterborne architecture, and architecture studio Goldsmith.

Peter van Wingerden, chief executive of Beladon, told DutchNews.nl that the cows were 'doing great' and that animal welfare was important for them.

"We are one of the animal friendliest farms in The Netherlands, and maybe even Europe," he said.