'Holy grail' of County tractors to be auctioned off 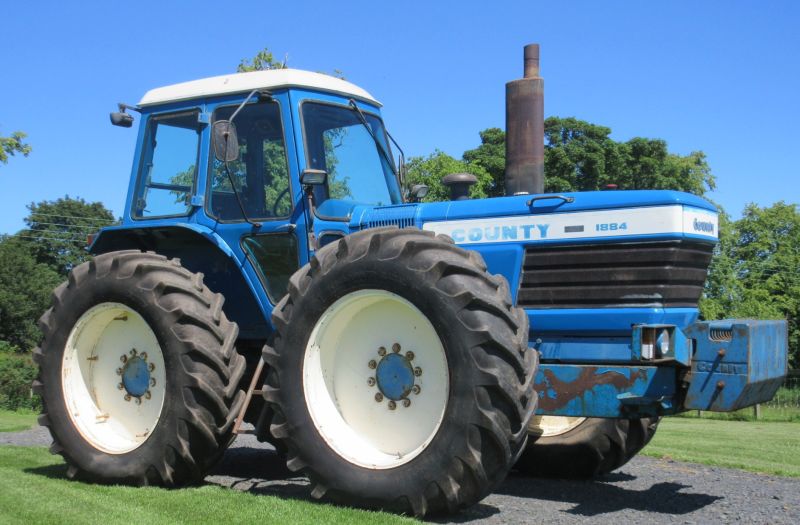 Machinery enthusiasts will have an opportunity to purchase the 'holy grail' for collectors of the popular County tractor during an auction later this month.

The 1982-registered County 1884 tractor is expected to attract an enthusiastic crowd when it comes under the hammer on Saturday 19 October.

The 1884 is the last and largest of all the tractor models to be introduced by the original firm of County Commercial Cars Ltd of Fleet in Hampshire.

Just a handful were built before the company went into receivership in February 1983 and two of them were exported.

The company continued under the auspices of the reformed County Tractors Ltd, but sales were extremely limited with the last supplied in 1989-90.

Estimates suggest there are no more than 20 County 1884s in preservation.

Scarcity is only one of the factors contributing to the 1884’s desirability - much of its allure is down to its striking appearance.

Based on the Ford TW-30, it used a turbocharged and intercooled version of the 401S engine delivering 188hp.

The 1884 was the first of the ‘long nose’ County tractors and had an extended bonnet housing the oil-cooler and main fuel tank.

This model was purchased as new from the Essex dealership, Cleales Ltd of Saffron Walden and Haverhill by Butler’s Farms of Halstead.

It changed hands three years later to its present owners who it has remained with since. It has recorded only 3,833 hours.

The high specification the County 1884 tractor meant they came with a hefty price tag as new and the annotation in a price list that has survived with the tractor suggests its purchase price was £40,940.

The tractor is said to be in 'super condition with low hours' by auctioneers Cheffins, who are encouraging tractor enthusiasts to attend the vintage sale.

Bill King, chairman of Cheffins, said: “This is almost certainly the strongest vintage sale for tractors we have ever put together at Cheffins.

“In any normal year without such an iconic tractor as the Ivel Agricultural Motor, this County 1884 would be far and away the standout lot and you could say that for many other tractors in the sale, too.”

The County 1884 tractor will be sold with full documentation including its original manuals, parts book and sales leaflet.