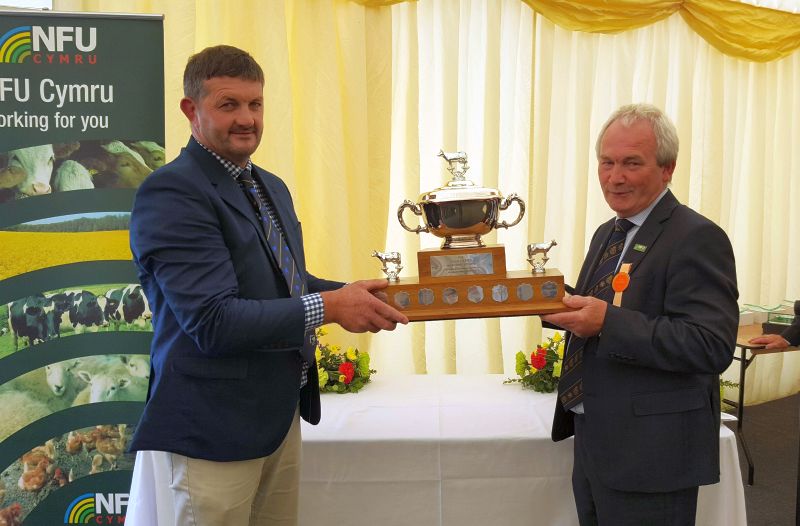 A "well-known and hugely respected" dairy farmer who has made an "outstanding contribution" to the agricultural community in Wales has been recognised.

The Idris Davies Memorial Trust Award was established in 1982, with the winner receiving a cash award together with a trophy presented at Pembrokeshire County Show.

Former NFU Cymru President, Stephen James, has been announced as the winner of the Idris Davies Memorial Award for 2018 during a ceremony at Pembrokeshire County Show.

Stephen runs a 330 cow dairy farming herd in partnership with his wife Joyce and son Daniel.

He reached the pinnacle of agricultural politics in being elected NFU Cymru President in 2014, a position he held for four years and before that he served as NFU Cymru Deputy President from 2010 until 2014. His association with the union spans over 20 years.

During his time as NFU Cymru President, he has also held a number of positions at European agri-political level.

It was the issue of Bovine TB that first ignited Stephen’s desire to get more involved with NFU Cymru at a local level and he went on to become NFU Cymru’s lead on all policy issues around animal health and welfare, including being the main contact between NFU Cymru and government.

Stephen has engaged with all aspects of the Bovine TB debate and has been equally as adept in putting forward the farmers’ perspective to the anti-badger cull lobby by engaging with organisations such as the RSPCA and the Badger Trust.

He also hosted the celebrity campaigner Brian May on his farm to show him the impacts of bovine TB on his farming family.

Stephen has also been at the forefront of lobbying for fairer terms and conditions around milk supply contracts and against Welsh Government proposals to expand areas of Nitrate Vulnerable Zones in Wales.

Mansel Raymond, Chairman of the Idris Davies Memorial Award Management Committee said: “Stephen has made an outstanding contribution to the agricultural community in Pembrokeshire in many ways, over many years and he joins some excellent company in becoming this year’s winner of this prestigious award.”