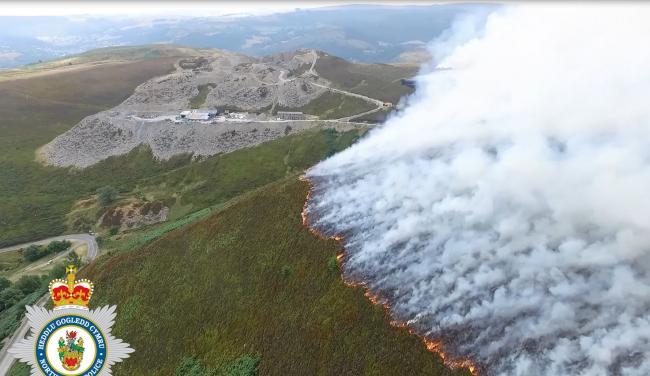 The grazing of sheep, combined with managed burning and mowing, were all 'essential elements' for the maintenance of heathland

A council has concluded that last year's devastating fire on the Llantysilio mountain could've been prevented if more sheep were grazing and maintaining the heathland.

The blaze started on 19 July in Denbighshire and ripped through the area until 25 September when the fire was eventually dampened out.

Sixty firefighters tackled the fire at its height and it damaged around 715 acres of land.

Llantysilio mountain is an important part of the local community and farming economy as well as heathland habitat which is home to black grouse and curlew.

Denbighshire County Council has conducted a review into the fire along with the impact on the community, businesses and the local environment.

The report, released last week, concluded that land management difficulties over an extended period of time contributed towards the length of time the fire burned.

It said the non-utilisation of grazing rights due to the downturn in the agricultural economy, a situation replicated across Wales, was an issue.

The grazing of sheep, combined with managed burning and mowing, were all 'essential elements' for the maintenance of heathland, which could help reduce the risk from fires, the council said.

The report has set out a number of recommendations including coordinating land management activities in this and other moorland areas to reduce the risk of similar fires in future.

Welsh government has been urged to support the economic and environmental sustainability of upland moorland areas and to consider providing financial assistance to facilitate the necessary restoration work on Llantysilio Mountain.

“The purpose of this review was not to apportion blame on any individual, service, organisation or group with respect of the fire or the response to it, but to better understand and learn from the event to help improve the response and management of similar incidents in future.

“On behalf of the committee I would like to thank the agencies who tackled this difficult mountain fire and subsequently agreed to take part in the Committee’s venture to understand and learn from it,” he said.