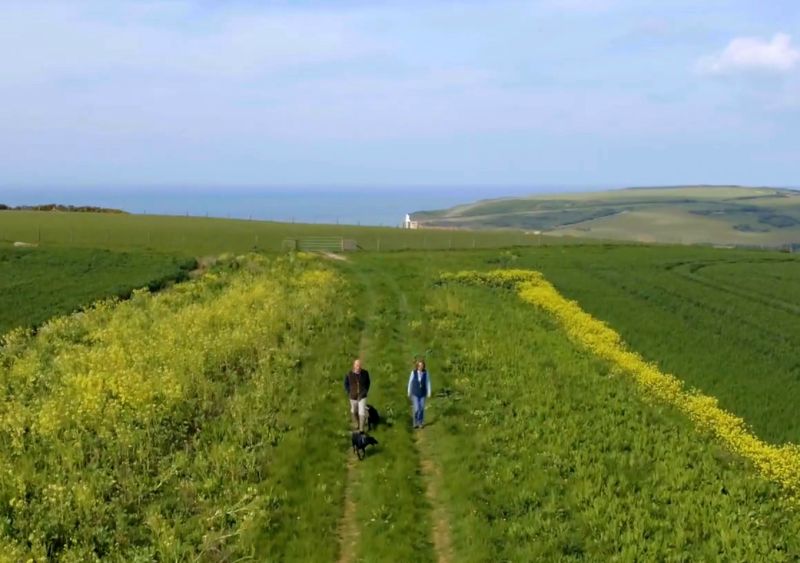 Holding a phone over the plaque, or reading the QR code, will reveal the film introducing the farmer responsible for caring for that stretch of land

Walkers in the South Downs will now be able to educate themselves more on local farming thanks to an innovative 'watch and listen' film trail.

Seven 'Meet the Farmer' plaques have been placed along the South Downs Way in West and East Sussex.

The stories by each farmer aims to give people a unique insight into farming life on the South Downs.

Holding a phone over the plaque, or reading the QR code, will reveal the film introducing the farmer responsible for caring for that stretch of land.

The films include drone footage of the South Downs and close-up wildlife shots.

The initiative, supported by the South Downs National Park Authority, showcases the work of members of the Eastern South Downs Farmers Group, which covers over 130 square miles of the Downs between Shoreham-by-Sea and Eastbourne.

The farmers are supporting endangered species such as the grey partridge and restoring priority habitats including species rich chalk grassland.

Farmer Ben Taylor, who manages the Iford Estate near Lewes, is featured in a film.

He speaks about the creation of new wildlife habitats on his farmland and a boost in bird biodiversity from just a handful of species to over 100.

“This land has been farmed for thousands of years since Neolithic times, so farming has made the landscape,” he said.

“I really enjoy seeing how farming and conservation can sit neatly side by side. We can look after the environment and, at the same time, produce food for people.”

Mr Taylor added: “Ten years ago we didn’t have a great deal of birds, but we’ve now got 140 different species on the farm, and 35 are red-listed because they are so rare. It’s because of the environment they find that they are here.”

He also speaks of farms’ changing roles and diversification, including opening up holiday accommodation, fishing lakes and renting out offices to provide rural employment.

The project builds on the success of the “Meet The Farmer” films in West Sussex, where 30 farmers in the Arun to Adur Farmers Group worked together to produce a similar trail on public rights of way.