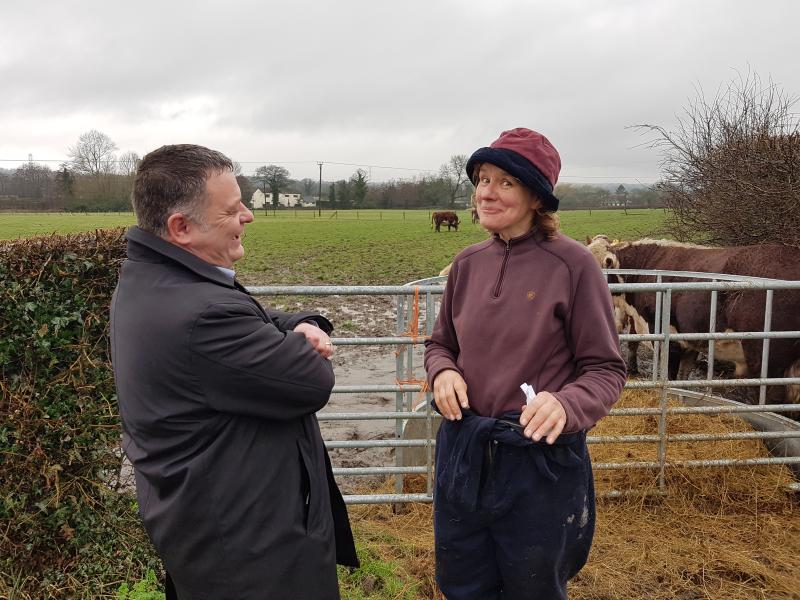 MP for Weaver Vale, Mike Amesbury with Cheshire farmer Alison Davies
Sign in to add your own press release SIGN IN Register

An MP who was accused of "nimbyism" has paid a visit to the farmer whose fracking case he recently raised during Prime Minister's Questions.

The Labour MP for Weaver Vale, Mike Amesbury, pressed Theresa May in the Commons over the case of farmer Alison Davies’s Happy Beef farm in Kingsley near Frodsham, Cheshire.

Ms Davies told the MP she was approached by staff by fracking company INOES who wanted to conduct a geological survey on her land.

But Mr Ambesbury was accused of "nimbyism" by senior Conservative minister and ex-Defra Secretary Liz Truss after he told Parliament how fracking will affect the farmer during Prime Minister's Questions.

Ms Davies alleged she had discovered them on her land and asked them to leave, but that INEOS still posted documents to her promising financial recompense if any shale gas was found.

INEOS Shale themselves Tweeted: “If Mike Amesbury wants to stand up in support of his constituents he might think about the thousands of people that work in manufacturing or live with central heating that depend on a secure supply of gas”.

The controversial practice has been banned in countries including Scotland, the Republic of Ireland, France and Germany.

Mr Ambesbury, who has been campaigning against fracking since he was elected last year, recently visited Ms Davies at her farm to see first-hand the land that INEOS had their eye on.

The farmer said: “I’d returned home and was very surprised to see them there taking pictures. They asked if they could do some exploratory work on my land but I said no and asked them to leave, but a few days later got paperwork through the door about how much they were going to pay me for anything they found. I found it very arrogant.”

Mr Ambesbury said: “Alison isn’t the first farmer in this area to make allegations of this sort of practice to me.

“She’s worried now that even if she rejects their advances they can drill underneath her land, and fears what impact that will have on the land and the grass her cows are eating. She feels that if this happens she may be forced to leave - which would be a tragedy as opening this farm was her dream.”