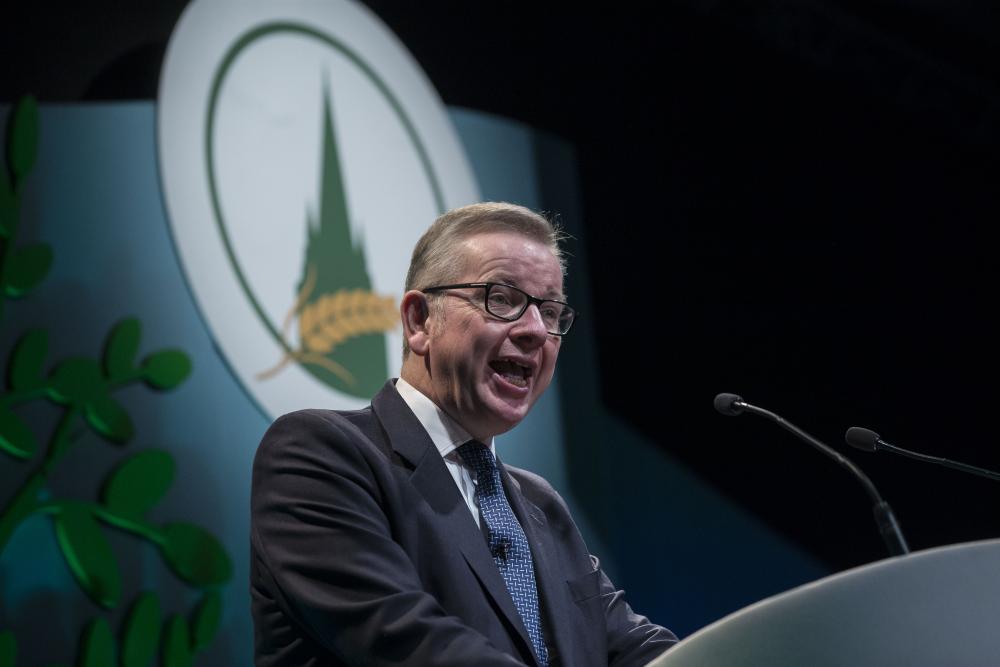 Speaking at the annual event, he indicated that the Government would move away from current payments as the country left the European Union, transitioning to a system that encouraged farmers to protect the environment and invest in new technology to improve productivity.

He told delegates at the conference that the Common Agricultural Policy was designed for another world. It had changed over time but he said it was still a fundamentally flawed design.

"Paying landowners for the amount of agricultural land they have is unjust, inefficient and drives perverse outcomes," said the Environment Secretary.

"It gives the most from the public purse to those who have the most private wealth. It bids up the price of land, distorting the market, creating a barrier to entry for innovative new farmers and entrenching lower productivity.

"Indeed, perversely, it rewards farmers for sticking to methods of production that are resource-inefficient and also incentivises an approach to environmental stewardship which is all about mathematically precise field margins and not ecologically healthy landscapes."

He said that, following a period of transition, the United Kingdom would replace the existing Basic Payments of the EU with a series of support payments for what he described as "public goods."

He said: "The principal public good we will invest in is, of course, environmental enhancement."

The Environment Secretary, who was a prominent member of the Leave campaign during the 2016 EU referendum, said he wanted to deliver a "Green Brexit" for the UK.

"Brexit will mean change. But, critically, what it means most of all is that we can once more decide how we shape change and how we meet the challenges ahead," he added.

"It means we don’t need any longer to follow the path dictated by the Common Agricultural Policy. We can have our own national food policy, our own agriculture policy, our own environment policies, our own economic policies, shaped by our own collective interests."

He was challenged during a press conference following the speech about how the changes would impact marginal farms, such as upland sheep units.

Michael Gove said the new support scheme would still maintain support for what he described as 'rural resilience."

He said: "When we think about rural resilience we need to think about those particular farms - and upland sheep farms are among those that are perhaps the best representative of this - whose profit margins are necessarily very tight but whose role in both preserving iconic landscapes and in keeping rural communities alive is particularly precious.

"So I have outlined a number of public goods that I think public money should be there to support and one of them would be maintaining ways of farming that have a value beyond the economic."

He responded to another question about the future availability of foreign labour following Brexit, by suggesting that the food industry should look to invest in new technology - something that the proposed new scheme would also support.

Mr Gove explained: "We want to ensure that every part of the food chain gets the labour it needs to secure a return on its investment but I also make the point that, ultimately, if you rely for too long on relatively cheap labour then your business is likely to be overtaken in competitiveness by those who invest in more capital intensive and productive methods of producing food or processing food."

He said: "We want to recognise that you cannot rely on an endless supply of cheap labour in order to maintain your competitive edge."

Whilst UK farming has raised concerns about losing vital migrant workers following Brexit, the Government has accepted that free movement of people across the EU was one of the main reasons that the public voted to leave.

"We should build on the innovations pioneered by our superb higher education institutions like Harper Adams University by investing more in automation and machine learning, moving from the hands-free hectare to the hands-free farm, with drilling, harvesting, picking and packaging all automated, precision mapping of every inch under cultivation with targeted laser treatment of pests and weeds and highly-focussed application of any other treatment required."

He added: "We should invest more in the sensor technology that can tell where, when and how livestock should be fed, housed and bred to maximise both yield and individual animal health and welfare."

The Secretary of State said that the Government would outline more details about its proposals in a Spring paper ahead of a consultation period.

But he said he envisaged a transition period to help farmers move from the current system.

He said that the Government had already guaranteed that the amount allocated to farming support in cash terms would be protected until the end of the current Parliament in 2022.

Support would continue for Countryside Stewardship agreements entered into before leaving the EU and the Government would ensure that no-one in an existing scheme was unfairly disadvantaged in the transition to new arrangements.

The 2019 BPS scheme would be paid on the same basis as now. There would then be an additional transition period until the new scheme was introduced, he told delegates.

When asked by one delegate to explain more clearly this transition period, he said: "We will continue to provide the same amount that is currently provided under the Common Agricultural Policy in cash terms for UK farmers right up until 2022.

"What I propose and what our Command Paper will say more about is that we will also continue to provide people with BPS payments for a further UK specific transition period beyond 2022 and I envisage that to be around five years from the end of the existing BPS in 2019.

"So five years when we will have broadly the same amount with a cap - how that will operate, whether it will be a hard cap or progressively reduced amount will be for consultation. The reason I mention five years is that it seems to me to be a good starting point for a debate about how we can balance the need to give people the flexibility in order to make the transition while at the same time not perpetuating the state of affairs whereby people rely on existing forms of subsidy."

He said the proposals should provide every existing farmer who received a BPS payment with a guaranteed income over an extended transition period.