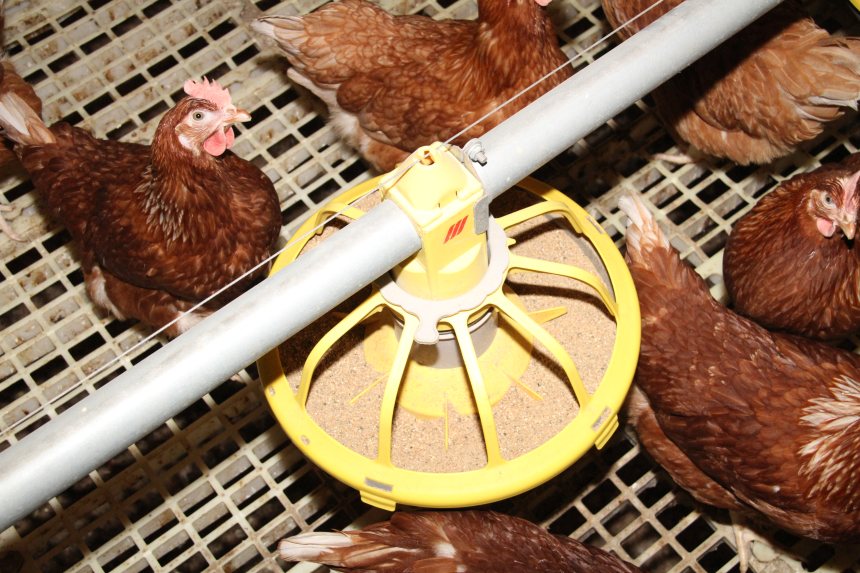 More than 80% of emissions calculated on free range egg farms are caused by animal feed, a report says

Findings from a report looking at the free range egg sector's carbon footprint show that the vast majority of emissions are caused by animal feed.

The organisation representing the UK's free range producers launched the findings of the study, which looked into the sector’s greenhouse gas emissions.

It shows that more than 80 percent of emissions calculated on free range egg farms are caused by animal feed.

The report - produced by consultancy firm Promar International - was unveiled during a session at the recent online Pig & Poultry Forums by the British Free Range Egg Producers’ Association (BFREPA).

Researchers looked at two free range farms, one a multi-tier unit with 64,000 birds and the other a flat-deck unit with 12,000 birds.

They found that 87% of emissions on both farms were carbon dioxide emissions coming from the use of feed.

Heather Webb, senior environmental consultant at Promar International, told those viewing the online forums that this differed from other farming sectors.

“We know that cattle, sheep and ruminants it is mostly methane and, in the arable sector, cereal grain growers emit mostly nitrous oxide linked to use of nitrogen fertilisers.

“It is really important to understand that in free range egg production the main greenhouse gas we are worried about is carbon dioxide and it’s coming from feed."

The laying poultry diet typically contains between 16 and 19% protein and much of that protein is sourced from soya.

Historically, soya meal protein has been imported imported to the UK from South American countries such as Argentina, Brazil and Paraguay.

Ms Webb added: "Importing product from those countries does attract a much, much higher carbon footprint because it can be linked to land use change.

"It can be anything between nine and 15 kilograms of emissions for every kilogram of feed that is imported from those countries,” she said.

Martin Humphrey of Humphrey Feeds said that most of the UK’s soya came from Brazil, Argentina, a small amount from Uruguay and Paraguay and some from North America.

Yet it was, ironically, given the problems with the Brazilian rain forest, only Brazil from which feed companies could obtain sustainable soya.

He outlined a number possible alternatives to the use of soya in the diet of free range hens, but he said that all the alternatives cost more than soya.

“It’s fair to point out that, whatever protein source we use it’s going to end up being more expensive than soya. I’m saying that purely in a financial sense, because the environmental cost is another matter.

"Feed manufacturers are not the bad men here and we don’t use soya just to annoy everyone. We use it because it is the most effective and cost effective nutrient effective protein source that we can have in the diet, even though we have been trying to use others as well.”

The main alternative, he said, was sunflower, as it was good for egg mass and high fibre. However, he noted it was still imported, although from nearer countries like Russia and Ukraine.

Insect protein was another alternative with a great deal of potential, but it was not yet legal: "It should have been legal last year but the pandemic got in the way in Europe.

"It has great potential but it will be more expensive than soya and we need to make sure that those extra costs if insisted upon are covered through the supply chain.”

Another option was using worms. Although not yet commercially available, they were 55 percent protein, offering some potential in layer feed.

Lupins were widely used south of the equator, particularly in Australia. They could be grown in the UK but they did not provide the total diet. Any such source of protein did need sunshine and there was not usually much of it in the UK, he said.

“Algae has huge potential,” he said. “You start with a glass and two weeks later you can have two lorry loads of algae, and that’s good quality protein, but it’s some way away.”

One controversial alternative is meat and bone, which stopped being used following the BSE scandal. “This was a near perfect raw material,” said Mr Humphrey.

“It was widely used since before World War 2 and it was insisted that it was used in diets during World War 2 but due to inter-species recycling there was a big problem and that was BSE. But it shouldn’t be a problem for us if we allowed to use it."

Heather Webb said that sustainability had become an issue for industry since the 2015 Paris Climate Summit triggered a lot of attention on the climate crisis and the need for economies to transition to net zero.

“In 2019 the UK government legislated a net zero target for the UK and that triggered a lot of action through all sectors of the economy, as everyone is now required to decarbonise and transition to a low carbon future,” she said.