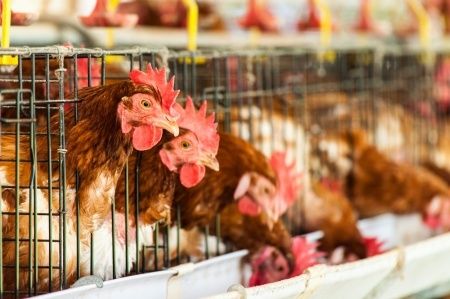 More than 90 per cent of all eggs outside the European Union are still produced in cages – mainly conventional cages - according to research conducted by the International Egg Commission (IEC). Even within the European Union, more than half of all laying hens are still kept in cages, says IEC statistical analyst Hans-Wilhelm Windhorst, who produced an analysis of egg production methods for the IEC’s conference in Lisbon, Portugal.

His report was presented at an economics workshop during the IEC conference in April. The figures he produced were based on statistics for 2013, and they show that, whilst free range hens account for half of egg production in the United Kingdom, some 93 per cent of layers in countries outside the EU remain in cages. Professor Windhorst said in his report that in some countries this was unlikely to change within the next 10 to 20 years. He said that the ethics on animal welfare developed in Europe could not simply be transferred to other parts of the world.

He told those attending the economics workshop, “Only when security of food is no longer a problem can animal welfare gain in importance. As long as you have a problem feeding people, you do not care too much about the welfare of laying hens,” he said. “You just want to produce food to eat for the population.” Professor Windhorst said that it was in countries where food supplies were plentiful that attitudes towards animal welfare had changed.

He pointed to statistics that showed differences in approach towards production methods even within the European Union. “Lithuania, Portugal, Spain, Greece, Slovakia, Poland, Latvia, Croatia, the Czech Republic - they all have 70 per cent and more in enriched cages,” he said. “Very few are in barn systems and almost no free range. Southern and most of the eastern side of the European Union are using enriched cages.

“On the other side you can see that Luxembourg does not have any cages – but Luxembourg is not very important in egg production.” He said that in countries like the Netherlands and Austria barn production was very high and in the United Kingdom and Ireland there was a large volume of free range.

Professor Windhorst said that a small percentage of conventional battery cages were still in use within the EU in Croatia by 2013. He said that because Croatia was a recent member of the European Union, the country had taken more time to convert its production to comply with the directive outlawing battery cages.

His report showed that in countries outside the European Union some 93.1 per cent of birds remained in cage units. His figures revealed that there was no free range production whatsoever in countries like Brazil, India, Iran, Mexico, the Russian Federation and Turkey in 2013. These same countries had no birds in barn units. All their layers were still producing eggs in cages.

Overall, in the countries outside the European Union that appeared in the report only 1.4 per cent of all egg production was free range and just 5.5 per cent barn production. Professor Windhorst said he did not have a lot of data for Central America and some parts of Africa, but he suspected that a significant number of hens in Africa would be in backyard flocks. He said that European ethics could not be completely transferred to other parts of the world. There was a completely different attitude towards animals and how they should be treated in other parts of the world, he said.

Professor Windhorst said it remained to be seen whether the attitude towards animal welfare adopted in Europe would spread elsewhere. Such animal welfare attitudes would be adopted in countries like the United States, New Zealand, Australia and Canada, but he was unsure whether Japan, for example, would follow this trend so quickly. He said he had spoken to people in Japan who said that discussion about the issue was beginning but it would be 10 or 15 years at least before there was any possible change in the use of housing systems for laying hens.