Alpacas guard the flock and keep the foxes away! 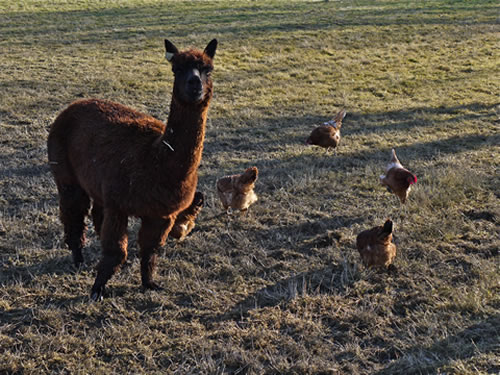 On first appearances Alpacas seem unlikely candidates for taking on the responsibly of guarding chickens and sheep. However, as one commercial chicken farmer in North Wales has discovered, his two alpaca wethers (castrated males) have taken up the challenge and have made excellent chicken guards.

The Parry family live near Ruthin in North Wales and farm over 18,000 chickens producing free range eggs. It was common place for a fox to come near the chicken houses and as a result egg production would usually fall by more than 13%. That’s just by putting in an appearance let alone entering the chicken houses themselves. Foxes upset chickens, that’s a fact.

Brynn Parry saw some alpacas at a local farm and decided to investigate the potential of these wonderful animals. The simple fact is that foxes do not like alpacas and alpacas do not like foxes. The mere smell of alpacas is enough to keep foxes away.

After a little research the Parry family contacted Tim Hey at Inca Alpaca and decided to buy two wethers, Chico and Maximus.

Chico and Maximus were quickly delivered to the farm and were introduced to their 18,000 new friends. Within 5 minutes both wethers took charge and began to inspect their surroundings and look for intruders. The chickens took a couple of days to get used to their new protectors but now they go about their business as normal and Chico and Maximus have been accepted wholeheartedly as ’big brothers’. 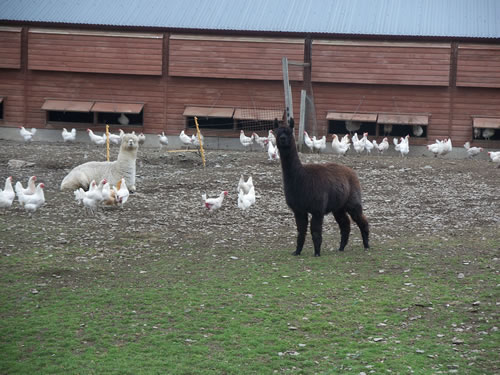 Alpacas are at home with hens or sheep

So much so that it is not uncommon to see hens sitting on the alpacas backs as they graze.

Brynn Parry says ’Since Chico and Maximus have been introduced to the business we have not seen a single fox around the chicken house and high level egg production has been maintained and therefore our profits have increased’.

So where are alpacas from and why do they dislike our native foxes? 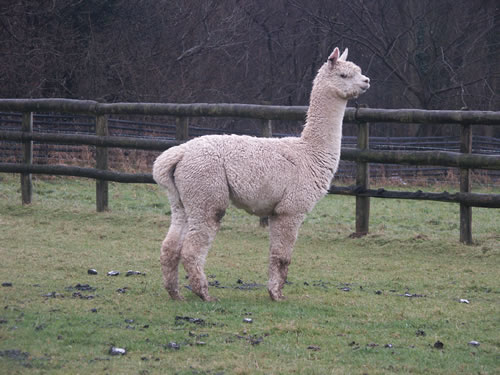 Alpacas are from the South American countries of Chile, Peru and Bolivia, but are appearing more and more in the UK as the world catches on to the outstanding properties of their luxurious fleece.

In South America, where alpacas have lived for thousands of years, they have several predators, one of them being the fox. The fox will take a weak or unwell baby alpaca (known as a cria) if it is unguarded.

As a result alpacas have developed an instinctive reaction to foxes. They have very keen eyesight and their ears can pick up the sounds of trouble from a long way off.

If a fox is careless enough to go near a herd of alpacas the adult alpacas will chase it away and if the fox is unlucky enough to get cornered they will trample it to death.

Alpacas have been used as chicken and sheep guards for over 17 years in Australia where there are over 150,000 alpacas producing a very fine, soft and elite fibre which is used in the luxury clothing market worldwide.

Their guarding potential was first realised when Australian sheep farmers, used to losing many lambs to foxes, tried them and noticed an immediate increase in lamb survival rates. The foxes were simply being chased away and as a result more lambs reached the market.

Here in the UK the alpaca has been used not only on commercial size chicken and sheep farms but also by hobby and small scale farmers. These otherwise gentle, inquisitive and bewitching animals are easy to look after and mix happily with their new families. Many farmers have alpacas as integral parts of their operations and are reaping the rewards as a result.

Alpaca wethers live for approximately 20 years and are very easy to keep and care for. Alpacas are very efficient grazers as they are classed as semi ruminants. This means that they do well on poor pasture and require no supplementary feeding other than access to hay all year round.

They require shearing once a year, toe nail clipping three times a year and twice yearly deworming and vaccinating.

Alpacas, being non aggressive animals, can easily be halter trained and will not challenge or jump over standard sheep fencing.

In short the alpaca is a real solution to profit loss due to foxes and there are many livestock owners who will testify to that fact.

Organic egg producer Gerald Osbourne says alpacas have proven to be a highly effective way of protecting his hens against foxes.

Alpacas were introduced to his farm at Pewsey in Wiltshire in 2005 at the same time as he first moved into egg production – and the alpacas have succeeded in deterring foxes even when the farm’s other defences have failed. On one notable occasion a fox was seen inside the electric fencing erected to protect the hens, but it was driven off by the alpacas, said the Rev Osborne, who is an Anglican Minister as well as a farmer.

"Anything four-legged, dogs as well, they pursue and keep away," he said. "They rush towards them and drive them off. I think the smell of the alpacas helps to keep the foxes away as well. We have still lost the odd hen to a fox but we have never had the mass slaughter you can get when a fox gets in and just causes mayhem."

Mr Osbourne has 4,000 organic layers – all Columbian Black Tail birds producing eggs for Waitrose. They are housed in two sheds each containing 2,000 birds, and the accommodation was converted from the original Challow cow kennels that previously housed the dairy herd Mr Osbourne used to have on the farm. "They make ideal housing," said Mr Osbourne. The farm also rears its own pullets.

Lawn Farm was an organic operation long before the introduction of the laying birds. The 1,100 acres comprises arable land, a beef unit and used to house a dairy unit, too. In 2005 Mr Osbourne decided to get out of milk and the cows were replaced by the laying birds. "It wasn’t really working trying to milk 8,000-litre Holsteins organically, so I decided to sell the cows. Then we thought we needed something for a bit of manure and to replace the milk cheque. That’s when I contacted Stonegate and managed to get the CBT contract."

The idea of using alpacas to protect the hens was suggested by someone at a local show. "I wasn’t sure how we would cope with them We have got nine strands of 9,000 volts like everyone tends to have but we got the alpacas at the same time," he said. There are four alpacas protecting the layers. Another four have just been bought to look after the rearers. Mr Osbourne has clearly been pleased with the results.

He says that the alpacas have been very easy to keep. Apart from having the animals shorn – a gang of New Zealand shearers specialising in alpacas tours the country providing their services, care involves clipping their toes and filing their teeth. They are hardy animals used to the cold of the Andes so British winters are not a problem for them. During winter they will eat hay and alpaca meal; the rest of the time they will graze the pastures on the farm. "We have trees around. We were told that was all they would need for shelter."

Mr Osbourne said the animals were placid; very easy to handle. "They can be a little timid but if you need to handle them you just have two people at either end of a rope. From there they are easy to handle." The alpacas on Lawn Farm are neutered males and cost about £400 each. Breeding animals can cost thousands of pounds and the better wool is to be found on breeding females, but the role of the alpacas at Lawn Farm is purely protection for the hens and Mr Osbourne says they have been very effective.

The four recent alpacas he acquired were obtained from Ivan Hayward, who farms on the border of Dorset and Wiltshire and who now breeds the animals. Ivan produces free range chicken meat on his farm - he has 30,000 birds producing regional chicken for Waitrose – and originally bought alpacas to try them out protecting his birds from foxes. They did that very well, but Ivan also got interested in breeding the animals and he has since enjoyed a fair bit of success in the show ring.

It was five years ago that Ivan, who has been involved in the chicken business all his life and is now 66, first introduced alpacas to his farm. "We have got electric fences and all the rest of these things, but from time to time they fail and we thought that alpacas would be a good back-up. I had heard about them and talked to people about them and that’s how it came about." He now has more than 50 alpacas.

"I got more interested in them and in the breeding side of them. I had looked at it myself and thought, ’What’s the sense of having neutered males when I could have some breeding stock for the same cost of looking after them and have a bit of a hobby out of it as well.’ We sell a bit of breeding stock. We make a bit of a return but chicken is still my main business," said Ivan, who works in partnership with Tim Hey of Inca Alpaca. "Tim is Mr Alpaca," said Ivan.

Top quality breeding stock can command huge prices. One good breeding male sold for £150,000 in Australia last year. The highest price Ivan has paid for an animal was £9,000 for a breeding female. Free range egg producers looking for alpacas simply to guard their hens can buy an animal for between £400 and £700.