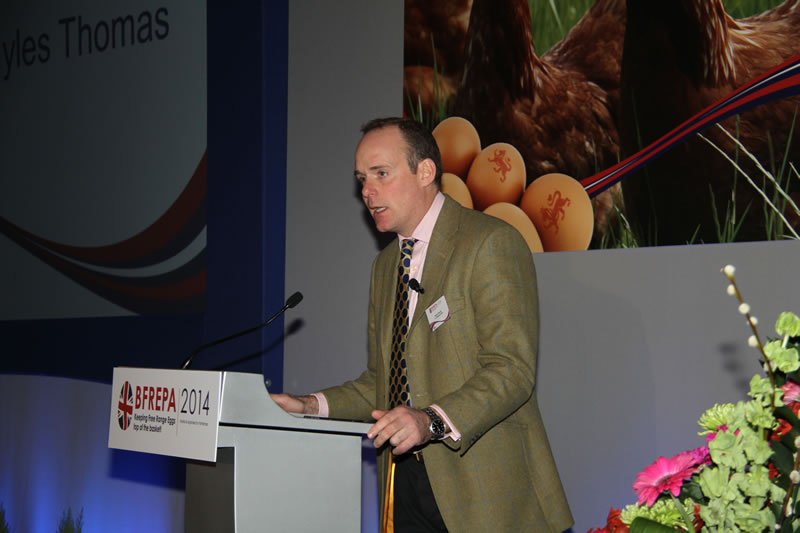 Myles, a free range producer from Shropshire, succeeds Roger Gent, from Berkshire, who has stepped down after two years at the helm of the organisation

The British Free Range Egg Producers’ Association (BFREPA) has a new chairman, following the election of Myles Thomas to the association’s top position.

Myles, a free range producer from Shropshire, succeeds Roger Gent, from Berkshire, who has stepped down after two years at the helm of the organisation. And, in his first speech as chairman to the BFREPA conference, Myles warned that the industry still needed to work hard to avoid the threat of a potential ban on the use of beak trimming. He urged free range producers to lobby their MPs to stop the ban going ahead.

The ban was originally due to come into force in 2011 but was put off on the advice of the Farm Animal Welfare Council, which was concerned about the risk of cannibalism and injurious pecking if it went ahead. However, a review is due to take place in 2015 with the possibility of a complete ban being introduced the following year.

Myles said at the conference, “One of the main issues, as you all know, is the proposal for a beak trimming ban in 2016.” He said there was help available at the conference to assist producers to draft letters to MPs and he urged producers to make use of that help. There have been some indications that the ban may be deferred again following large outbreaks of injurious pecking in two of the three large commercial flocks involved in trials being run by the University of Bristol. But Myles said, “Please, it’s not a done deal. There is still a chance that this ban might come into place. We need to keep lobbying MPs.”

In his final report before standing down, Roger Gent said that BFREPA had worked together with the National Farmers Union and the British Egg Industry Council to lobby Parliament about beak trimming. “To date we have had a good response,” he said. But Roger warned that the planned 2015 review would not take place until after the General Election. “The result could be political and not based on science. So we need to keep the pressure on,” he said.

Myles expressed his thanks to Roger Gent for the work he had done for BFREPA during his term of office. Myles said that last year had been a busy one, with BFREPA representing producers at all levels. “I would like to thank other industry bodies for working alongside us and I hope this continues to be the case. Good relationships are key to enable us to achieve our objectives and keep delivering more value for our members.”

He said, “We have an amazing industry; one which has possibly evolved more than any other in UK agriculture over the last 20 years. It is my true belief that BFREPA has also changed beyond all recognition in recent times - now offering the producer more than it ever has.” Many new initiatives had come to fruition over the last 12 months, including BFREPA’s involvement in the creation of an isotope testing database, he said. The association had embarked on campaigns to promote free range eggs, there was a new insurance affiliation that he hoped would save members money and a new sponsorship scheme that would enable BFREPA to get more involved in research projects. “And don’t forget the Ranger - I think the most influential magazine in the UK egg industry,” he said.

During the elections at BFREPA’s annual meeting Myles’ position as vice chairman was taken by James Baxter, who represents Scottish producers on the association’s council. James, who farms at Leswalt, Stranraer, was elected unopposed.

Most existing members of the BFREPA council were re-elected en bloc, although four new representatives have joined the association’s representative body. Pauline Jones was elected as a representative of Welsh free range egg producers, Adam Webster has replaced the retiring John Dalrymple as a Scottish representative, David Preece is a new representative for the Central area and Ben Wharfe has been elected to the council for the North West.

Treasurer Alison Gerrard reported that the association’s finances were in a healthy position. She told members that income for 2014 was up on the previous year and she said that spending was in keeping with income. A breakdown of the association’s income streams show that just under half of BFREPA’s income comes from advertisements in the Ranger. Subscriptions account for a third of income and sponsorship provides six per cent of the association’s income, although BFREPA is hoping that the contribution from sponsorship will increase in the future to take pressure off members’ subscriptions.

Alison Gerrard said that, overall, the association was on a “sound financial base.” She said the budget for the coming year was projecting a similar surplus to the one for 2014.