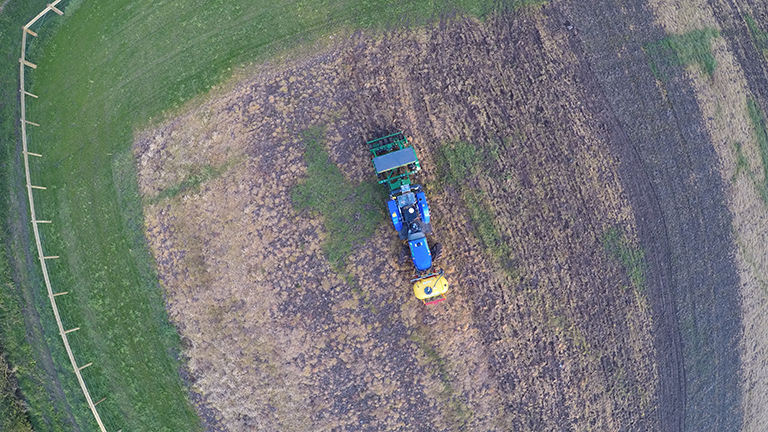 These changes mean that the use of autonomous equipment could see greater independence for farmers, a chance for smaller farms to become cost competitive, and less need for farmers to ‘get big or get out’ in arable production.

The paper is the work of Harper Adams' professors James Lowenberg-DeBoer, Richard Godwin, Karl Behrendt and senior lecturer Kit Franklin– and is the first of its kind to be published.

“The Hands Free Farm is a great place to study the economics of crop robotics, which is presently a very sparsely researched area," he explained.

“As far as I can tell, this is the one place on earth – certainly within the public sector -where you can get information about a whole cycle for comparing results of the kind we did, particularly with autonomous equipment.”

Because of the unique nature of the Hands Free Farm and Hectare projects, the researchers were able to use data gained from them in the paper to show how crop robotics could be applied to arable agriculture – drawing upon actual field experience and real-life data unavailable to many other studies of crop robotics.

The nature of the equipment used on the Hands Free projects was also beneficial to the study, Professor Lowenberg-DeBoer said.

“It is a much better place to set out this kind of analysis from. The idea was to produce an economic study to help engineers and investors to establish what would be the best use of this equipment.

“Much of this technology is becoming readily available and is almost there – and the Hands Free Farm showed it was possible,” he said.

The study noted that the costs of farming using the autonomous equipment used on the Hands Free Farm is substantially lower than on conventional farms – as the equipment involved is smaller and used far more extensively.

The report concludes: “The ability to achieve near minimum production costs at relatively smaller farm sizes, and with a modest equipment investment, means that the pressure for farming businesses to continually seek economies of scale (i.e. to “get big or get out”) is diminished.

“This provides the opportunity for modest size grain enterprises to become profitable instead of being a lifestyle choice.

"With reducing the need for labour and equipment investment, those modest sized grain enterprises could be combined with livestock, on-farm value added activities or off farm employment to provide enough income for family needs.”

"With autonomous equipment, for instance, it will be possible for many more farms to become organic," he said.

“With autonomous equipment, and a little bit of AI, you can create machinery which enables farmers to do things at much more competitive prices.