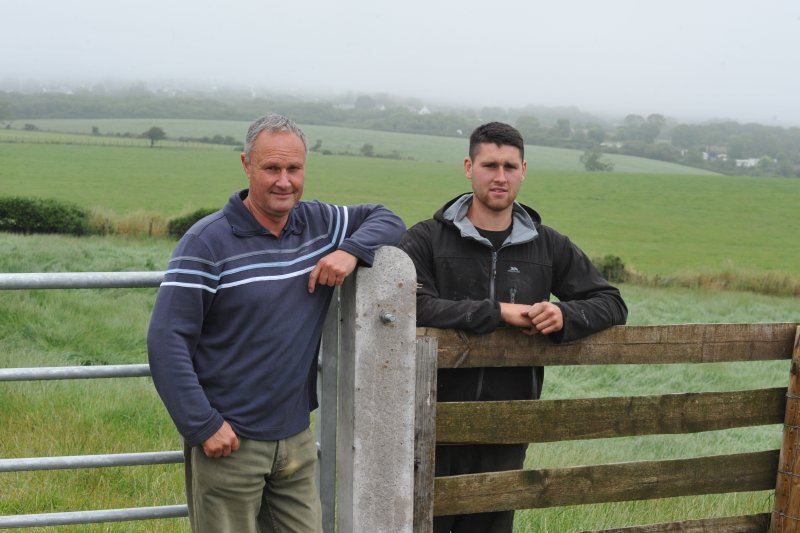 The Griffith family planted 27 acres of the crop in two fields at Bodwi, at Mynytho near Pwllheli, in April.

“It is the first time we have grown it in 20 years," said Edward Griffith, who runs a herd of 140 Stabiliser suckler cows with his wife and son, Jackie and Ellis.

It is one of the projects the family farm is undertaking as a Farming Connect demonstration site.

They want to establish if it can reduce the cost of the current system of home-rearing bull beef on ad-lib concentrates and straw compared to out-sourcing finishing.

The family currently finish half their bull beef animals at a unit in Selby, but if growing and feeding their own cereals can reduce the cost of production of the home-reared animals that policy might be reviewed.

“Our current system of feeding concentrates and straw is not sustainable given the price we are getting paid for the cattle, our costs were getting out of hand because we were buying everything in," said Mr Griffith.

The target age for finishing is 12-14 months with animals sold direct to slaughter. Some of the male animals are sold as breeding bulls at 12-14 months.

One of the reasons why the business stopped growing barley was because it was rolled and the dust it created was a hazard to health.

This new crop will therefore be crimped; this means high moisture grain can be harvested around three weeks earlier than the conventional harvest and processed by a local contractor.

The barley was sown in 'ideal' conditions in the first week of April, explained Mr Griffith.

The variety is Laureate, a seed that has performed consistently well on the AHDB Recommended List since it was first listed in 2016.

Soils at Bodwi are fertile medium loam. Immediately after ploughing the fields were flat rolled to retain as much moisture as possible because conditions were dry, and to ensure a fine and firm seedbed.

A 15-15-15 fertiliser was applied at 150kg/acre and will be followed by top dressing of a nitrogen-based product later in the season.

As soil analysis indicated a lower than desirable pH, prilled lime was applied before drilling at 200kg/acre.

Before the establishment of any crop it is crucial that all limiting factors are examined, starting with a soil nutrient analysis, advised agronomist Gareth Mitchell, who is providing agronomy advice to the project at Bodwi.

Soil pH can make or break a crop: “You can choose the best variety available but it will not perform if nutrients are poor," said Mr Mitchell.

“The same applies if you have perfect P and K indices but a poor pH as the P and K will not be available for the plant uptake."

The seed was drilled with a combination drill in good conditions on 9 April at a rate of 75kg/acre.

“Upon my last visit the barley was looking well although, due to dry conditions restricting nutrient uptake, the new leaves were pale and stressed," he reported.

“Now we have had some rain I expect the barley to really take off in the coming weeks."

The next challenge will be weed control: “As of now we haven’t seen hardly any weeds germinating but it’s critical to take the weeds out as soon as the flush of weeds has germinated to minimise competition and stress to the crop," said Mr Mitchell.

The first fungicide application to the crop at Bodwi (T1) will be applied at the late tillering stage.

“This is the main timing for rhynchosporium control, although brown rust, net blotch and mildew are also targets," Mr Mitchell explained.

“About 40% of yield response to fungicides comes from this timing. Azoles, strobilurins, and SDHIs are used at this timing."

Application rates will vary depending on disease pressure: "Due to the lack of good curative fungicides available now it is absolutely critical that the prevention approach is prioritised rather than adopting a firefighting approach," Mr Mitchell said.