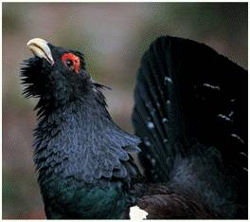 A NEW report has suggested that bilberry may play a significant role in the survival of Scotland's most majestic game bird – the Capercaillie.

Research carried out by Dr David Baines of The Game Conservancy Trust, Dr Robert Moss of The Centre for Ecology and Hydrology and Desmond Dugan of the RSPB over a 10-year period has revealed that forest managers who wish to benefit capercaillie should aim for bilberry cover of 15-20% or more combined with effective, legal control of foxes and crows.

Capercaillie are closely associated with old forest rich in dwarf shrubs, especially bilberry. Such vegetation provides good cover while the bilberry supports abundant invertebrates which, together with bilberry leaves and berries, comprise a large part of the chicks' diet. Indeed larval consumption and brood survival are related.

Fourteen Scottish study areas were monitored over a decade and, although none had more than 24% bilberry cover, the report (recently published in Journal of Applied Ecology) suggests that no further improvement in breeding success was apparent above 15-20% cover. The report also implies that too much bilberry and other tall vegetation might hinder chicks from foraging.

No other significant association between breeding success and habitat species, except bilberry, was found.

The report also recommends the control of foxes and crows by legal means if gamekeepers are to contribute to capercaillie, and other species', conservation and states that not all predators are equally important to capercaillie. Although pine martens certainly take capercaillie eggs and chicks, the report found that their predation was unrelated to capercaillie breeding success.

Foxes, says the report, kill martens and may also compete with them for food and it seems likely that foxes have a bigger effect on capercaillie than pine martens such that the removal of foxes benefits both capercaillie and martens.

"The evidence from our and others' work provides no basis for changing the protected status of pine martens nor does it show that increased numbers of gamekeepers would in itself necessarily benefit woodland grouse." continues the report.

"Although poor breeding success of capercaillie was probably the main cause of their recent decline in Scotland, better adult survival might have compensated for their reduced reproductive rate. A main cause of mortality is collisions with deer fences and calculations suggest the decline might not have occurred in the absence of deaths from flying into forest fences."

Dr Dave Baines said there were many issues that had to be addressed before the environment is right for capercaillie:

"Effective, legal predation control is very important to the survival of capercaillie, especially the control of foxes and crows. Forest managers have to be aware of the whole picture including what vegetation is beneficial to the birds, the proximity of deer fencing and indeed the best methods of predator control."