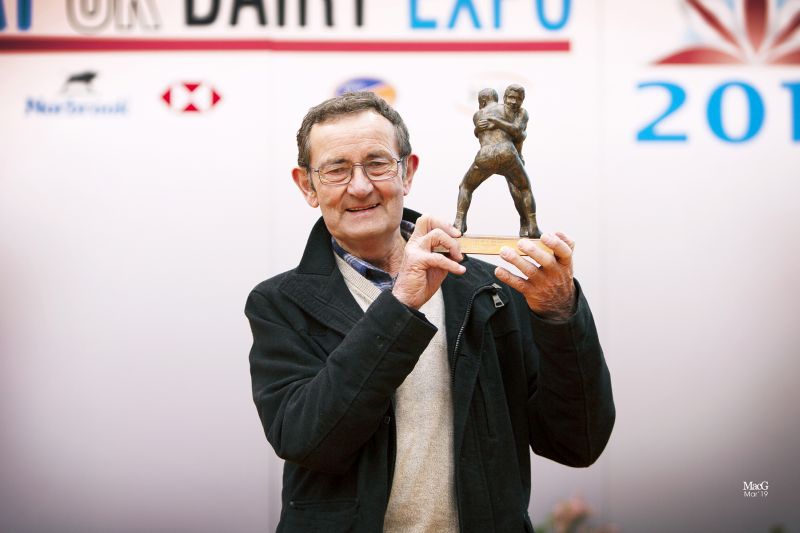 Bill has spent his lifetime building on the foundation of strong cow families, which excel in strength, type and the ability of produce large volumes of milk

At the Borderway Dairy Expo in Carlisle, Bill Nadin from Sterndale Holsteins, based in Derbyshire, was announced as the 2019 recipient of the John Dennison Lifetime Achievement Award.

The highly acclaimed award, which was established in memory of Cumbrian dairy farmer John Dennison, and presented by the Dennison family, aims to recognise a dairy cattle breeder who is judged to be a high achiever and exemplary role model.

Announcing this year’s winner, Harrison & Hetherington’s Glyn Lucas and one of the award judges said: “This year’s nominees were exceptional but Bill’s passion for the Holstein breed shone through and he more than exceeds in the criteria to be honoured with this title.

“His achievements are far too many to name, but from humble beginnings similar to that of John Dennison, Bill has achieved great things through astute investments and an expert eye for buying and breeding them better.”

Bill has spent his lifetime building on the foundation of strong cow families, which excel in strength, type and the ability of produce large volumes of milk.

He is admired and appreciated throughout the industry and has shown foresight and an incredible talent for breeding excellent cattle throughout his whole life.

Bill, who has lived at Fernydale Farm all his life, started his dairy career helping his uncle on the farm. At 15 he was delighted to leave school to follow his passion in life of cows, milking mostly commercial Friesians.

In his early twenties he decided to upgrade some of the better cows in the herd to pedigree and used semen from a Canadian Holstein bull on the best, soon realising the advantage of the results with their larger frames for the capacity to eat more forage for improving milk yield.

In the mid 1980’s, his efforts were already apparent, and he was presented with the very prestigious award ‘Dairy Farmer of the Year’ over England, Scotland, Ireland and Wales from over 100 entrants.

Always looking to improve the herd he travelled to Canada and United States in the late 1980’s and early 90’s to source new cow families, bringing back numerous animals to start families such as the Fawn’s, Gloria’s and Barbs to name only a few, as well as also investing in the UK with his purchases like the Ghost’s and Ashlyn’s.

He has had five reduction sales over the years, and in the 2003 sale achieved the highest price ever paid at auction for a cow in-milk, when Field of Dreams Formation Erle sold for 76,000gns.

Not shy to invest deeply he brought some embryos jointly in partnership with Riverdane Holsteins from the famous Lavender Ruby Redrose Red.

This resulted in only one heifer calf, however she proved to be exceptional and sold in a 2008 sale in Connecticut, USA, for $255,000, the highest priced yearling heifer to be sold at that time.

Some bulls also sold and have gone on to do well such as Sterndale Rose Royce Red which Semex marketed in the UK and abroad with numerous excellent animals to date. Another bull that deserves a mention is Sterndale Affection from the Ashlyn family which boasts many excellent cows in the UK to date.

Cattle Shows have been are a very important part of Bills life, a shop window for him to showcase his outstanding animals. He, along with the enthusiasm and dedication of his partner Yasmin Bradbury are strong supporters of all the major shows and local ones, securing many class winners and champions along with numerous All Britain Nominations.

Despite selling the milking portion of the herd in 2018, Bill continues to work tirelessly in the industry. He is a huge advocate for encouraging the young members of the industry and is always on hand to help out within the Derbyshire Holstein Club hosting many stock judging competitions and supporting the youngsters with calves for the HYB competitions.

In 2018, Bill was presented with the Holstein UK Howard Sneesby Memorial Trophy, which recognises those members who have made a significant difference to others through constant support and encouragement. Bill has also recently been entered into the Holstein International most Influential Breeder of the last 25 years competition.

On receiving the award, Bill said, “I am totally surprised and delighted to accept this award and would like to thank Yasmin, the family and staff who have made it happen. Thank you very much also to the Dennison family.”