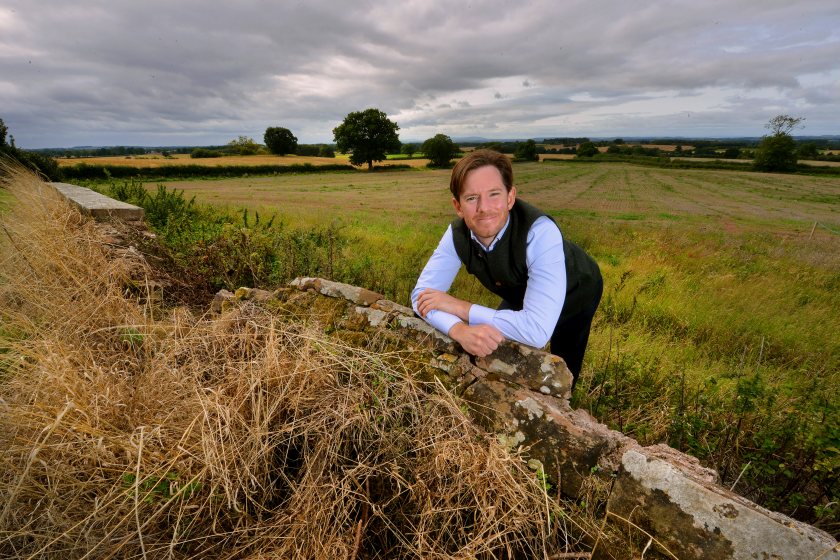 An estate has unveiled a new regenerative agriculture plan to change the way its farming business is managed to 'ensure a healthy legacy for generations to come'.

The plan has been introduced by Bradford Estates, which owns 12,000 acres of land, farms and properties across Shropshire and Staffordshire.

The regenerative farming plan will focus on 3,600 acres of farmland in Shropshire, which will return to being managed directly by the Estates’ team.

He has called upon two independent soil experts to look at current farming methods and advise on the best way to protect the farmland.

Simon Jeffery, reader in Soil Ecology at Harper Adams, and Stephen Briggs, Head of Soils at the Royal Agricultural Society of England, have been working on a plan that will transform the way the land is managed.

New farming practices will be adopted, including increasing ground cover crops and introducing grazing animals to reduce the need for fertilisers.

Direct drilling into the soil to plant crops will also be introduced, as will the creation of habitats for natural insect predators, such as ladybirds and starlings to reduce the need for chemical pesticides.

A soil survey will be conducted to show what kind of crops are most suited to be grown on Bradford Estates.

Mr Newport blamed globally modern farming methods for stripping the nutrients out of the soil: "If left unchecked, farmlands will eventually become unviable for crop growth," he said.

“Most current UK farming relies on chemical fertilisers, pesticides and herbicides to ensure that the yield is as high as possible.

"But there’s now evidence to show that the side effects of this mean that within the next 50-100 years, our soils will no longer be fertile enough for the growth of crops. We have a duty to change things."

While it will not be a quick process, Mr Newport said it was 'vital to protect not only the future of the farm, but the future of overall food security in the UK'.

Simon Jeffery, who has more than 20 years' experience in soil, noted that if current farming methods did not change across the globe, 'soil would be ruined'.

“If you pick up a handful of soil, there’s more bacterial cells in it than there are humans on planet earth," he explained.

"Most of them are doing stuff that’s useful to us, such as releasing nutrients from rocks to feed plants, or capturing methane preventing it from entering the atmosphere."

He added that it could take 500 years to create one centimetre of soil, and just an afternoon of rainfall to wash it away.

"We will run out of fertile soil if things carry on in the way they have been and when that happens, it will impact our food security.”

"It would be easier for them to continue using the system they already employ, with tenant farmers, but they want to ensure the health of the soil for the long term," he said.

“They’ve recognised that their most important asset is the land and soil and it’s vital that it’s in a healthy state."