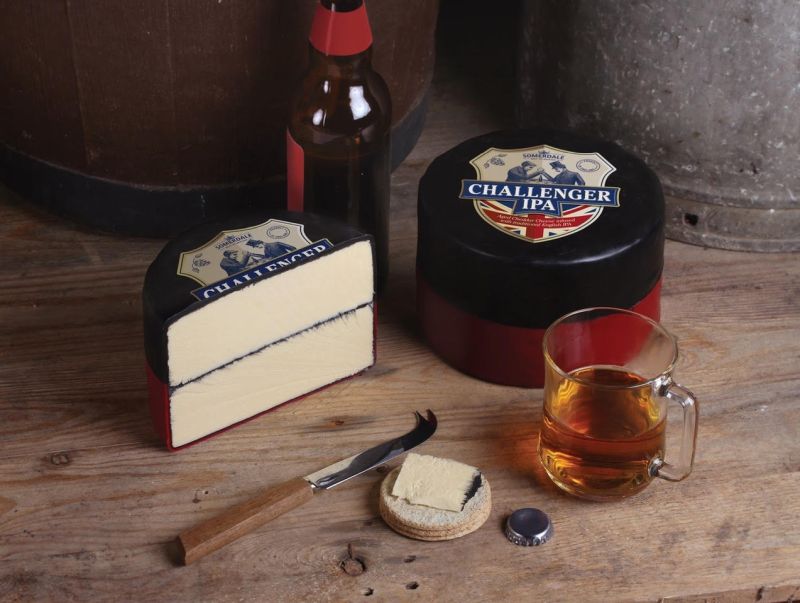 The unique cheese is crafted and aged on the Barber family farm 15 miles away from the village of Cheddar itself and is then infused with a traditional British IPA.

The cheese is divided by a fine line of ash to create a visual when cut and making it stand out from other cheeses.

Each wheel is then coated in distinctive red and black wax, sealing in all of that ‘beery goodness’.

Somerdale International, the largest importer of British cheeses into the US, is showcasing the product at the International Dairy-Deli-Bakery Association trade show in Orlando, Florida.

The trade show, which began on June 2 and ends on Tuesday, is expected to attract over 10,000 trade visitors and 800 exhibitors.

Alan Jenkins, Sales Director at Somerdale, said the cheese is a 'match made in heaven'.

“This year’s IDDBA also provides a great platform for us to showcase our range of great tasting cheeses for the holiday season.

“They combine the very best of traditional British cheese with a festive & fun twist and are set to make a real impact on deli counters across the States over this year’s holiday season,” he said.

In 2018, Somerdale's sales in the USA and Canada passed the £15 million per annum sales barrier, with revenues having increased by over 35% in the last 5 years.

This year the company is set to import a record 2000 tonnes of cheese through some 3,000 retail and foodservice outlets.