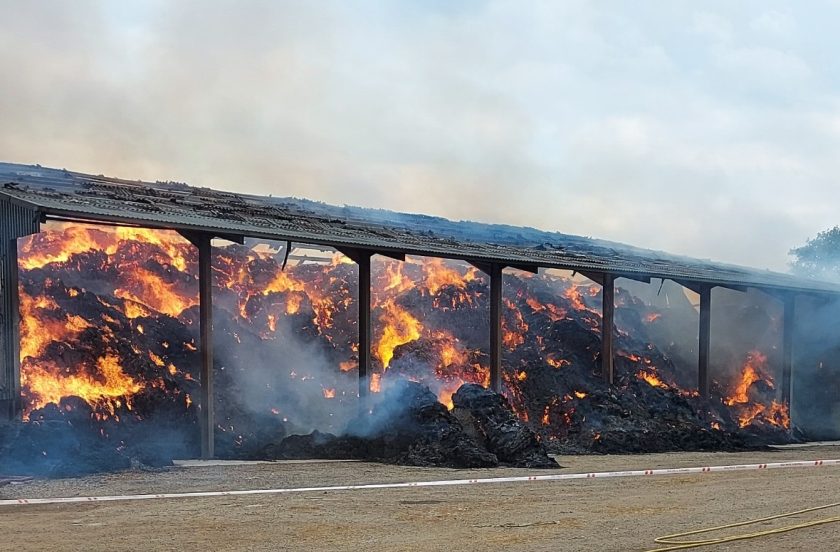 Fire crews worked through the night to tackle the blaze (Photo: Cheshire Fire and Rescue Service)

Firefighters have tackled a substantial barn fire which destroyed 8,000 hay bales at a secluded farm near Knutsford, Cheshire.

Fire crews were called to reports of a fire in Marthall Lane, Marthall shortly beore 1pm on Wednesday (23 September).

A steel-framed barn, measuring approximately 40m x 28m and containing 8,000 hale bales stacked from the ground to the roof space, was well alight.

Five fire engines were sent to the farm to tackle the blaze, using a hose reel jet and a 45mm jet to create a fire break to protect other barns nearby.

A farmer helped Cheshire Fire and Rescue Service crews with this by using farm machinery to move hay bales.

Cheshire Fire and Rescue Service said in a statement: "A clear fire break was established between barns and firefighters set up a water supply to get enough water to the area.

"They then began to use a main jet to deal with the fire from a safe distance whilst other buildings were protected with cooling jets.

"A high volume pump was set up to deal with the fire more effectively and a temporary road closure was put in place in both directions of Marthall Lane."

It added that farm machinery was used to move unaffected hay bales away from the fire.

The farmer used a mechanical digger to remove hay bales from a shed and from the back of the barn. The hay was damped down by firefighters during this process.

At this stage it is believed the blaze was started accidentally, Cheshire Fire and Rescue Service said.