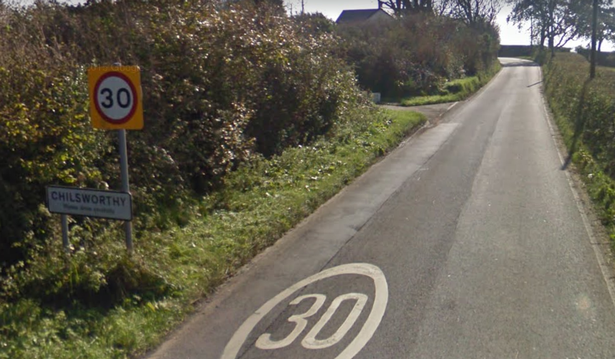 The trial of the Chilsworthy woman was described as "bizarre" (Photo: Google Maps)

A Christian farmer who claimed she did not have to obey planning laws because the land belonged to God has been ordered to pay thousands of pounds in fines and costs.

Laine Shepherd and her husband Stephen were found guilty when a jury at Exeter Crown Court rejected her assertion that only God could judge her.

The 43-year-old described herself as a 'living soul' and refused to answer to her name during a bizarre three day trial in which she said the disputed land belonged to God rather than her.

The couple bought an eight acre smallholding at Basset Farm, Chilsworthy, near Holsworthy for £101,000 in 2015 and started living in a static caravan without permission.

They farmed pigs and poultry and added a second static caravan before moving two mobile caravans and advertising themselves as a camp site.

They were ordered to clear the land in January 2017 and an enforcement order came into effect in August 2017 which was not complied with.

He told Laine: "You made perfectly clear to me and anyone in court that for some reason, based on a mightily strange interpretation of the Bible, think you are not bound by the laws and rules of this country that apply to everyone else.

"You think in some way you are not a person and are a 'living soul' who does not have to follow the laws of England and Wales.

"You have a particularly warped interpretation of the bible. I am not criticising you for your religious beliefs but they do not entitle you to behave in such a way that you can do what you like.

"It is a feature of the case that you did not just fail to comply with the law but, to use an expression, you stuck two fingers up at the law and increased the breach.

"You added two touring caravans and advertised for people to go there for holidays and the like."

He told Stephen that his culpability was less because he did not own the land and had less dealings with the council.

During the trial the jury heard how Torridge District Council officials who went to Bassets Farm to try to persuade the couple to move the caravans were met by Laine, who quoted sections of Leviticus and told them God owned the land.

In court she refused to answer to her name, preferring to be referred to as 'a living soul'.

When shown a map of the smallholding she said: "It describes the area as 'the land', not as God's Land. God will not sell land. It is not ours. I am not the Crown's person. I do not accept responsibility for that person. I am not subject to the Crown.

"I am allowed to live by the Bible and to have my religious beliefs, otherwise it would go against the Equality Acts. The Bible says not to accept any title and also says not to get into judgment. What is in the Bible is correct."

Stephen Shepherd employed a more conventional defence. He said he did not own the land, had no control over it, and played no part in defying the enforcement order.