Co Down man wins this year's Grassland Farmer of the Year 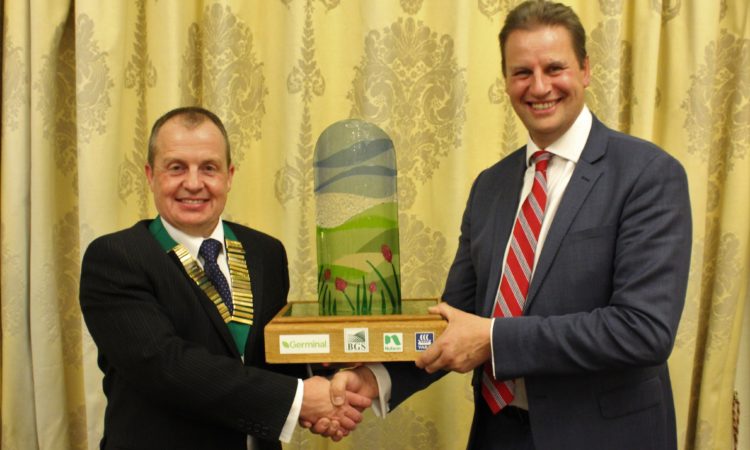 A County Down farmer has won this year's prestigious Grassland Farmer of the Year competition.

Replacement lambs are home-bred, with the emphasis on a smaller, more prolific ewe to suit an intensive, rotationally grazed system.

Finished lambs are sold off grass by the end of November and with an overall stocking rate of 13 ewes/ha, the farm regularly produces 500kg of lamb carcass per hectare.

He has also worked with the Agrifood and Biosciences Institute (AFBI) in Northern Ireland as a co-researcher to develop easier care sheep systems, while also improving profitability.

Head judge Steve Brandon said: “The judging team was impressed by how John has developed the farm through innovation and working with research, utilising the farm’s ability to produce high yields of quality grass, which is then converted into a high level of profitable finished lamb.

“This has all been done alongside consideration for the environment, taking part in various environmental schemes to improve habitats for birds and other wildlife’.

Of the total milk yield, 69% comes from grazed grass and concentrate usage is 700 kg/cow.

The judges highlighted the ‘tremendous amount of emphasis placed on planning, setting budgets and KPI’s, with the focus on utilising the high yields of grass produced’.

Robert Cheriton returned to his home farm six years ago after a spell in New Zealand.

The herd of 250 crossbred cows now calve in a tight pattern from late August to the end of November and produce 52% of the total milk yield from forage.

Paddock grazing and the reseeding of underperforming fields has helped to increase the stocking rate to 3.4 LU/ha across the grazing platform.

The judges felt that this young 26-year-old farmer should be congratulated on what he has achieved so far.

Summarising the competition Steve Brandon said: “All three finalists should be commended for their appreciation of what well-managed and measured grassland can contribute to a farm’s profitability.”