Controlling docks could improve grass dry matter by over 10% 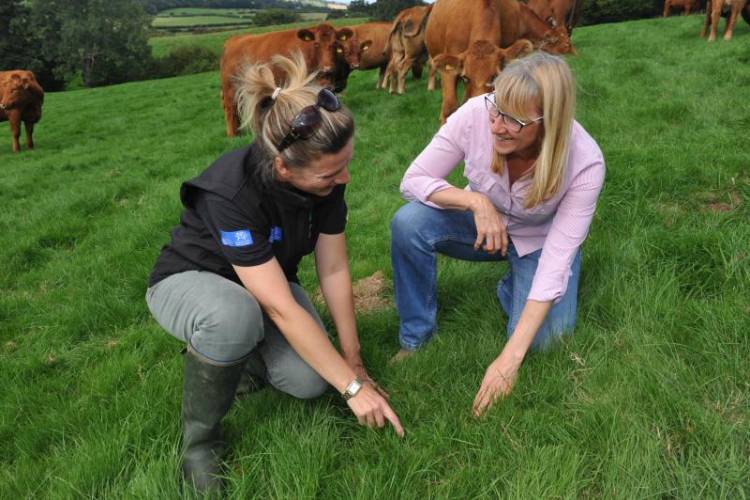 Farmers were advised during a Farming Connect Focus Farm event at Newton Farm, near Brecon

Controlling docks could improve grass dry matter per hectare on grassland farms by over 10 percent, according to an industry expert.

Docks are one of the most economically damaging weeds in grassland, competing directly with grass and reducing yield.

If a field has 2.5 docks in every 1m2, 10% of that field will be lost to docks; with farmland rental values in Wales averaging £284/ha according to the most recent figures, this amounts to a loss of £28.40/ha.

This, combined with a loss of grass dry matter of 0.6t in a field that grows 6t per ha per year, could equate to a replacement feed cost of £118.20 based on figures from the Dairy Grass Values project.

This is according to Sarah Hughes, Farming Connect Red Meat Technical Officer, who advised farmers during a focus farm event Newton Farm, near Brecon.

“It is more cost effective to control docks than to rent more land or buy in extra feed,” she told farmers.

Docks germinate mostly in the spring and autumn but at other times too, from both seed and roots; each plant capable of producing 60,000 seeds a year, seeds that can be viable for 80 years.

Docks do have some feed value - 65% of the feed value of grass - but stock won’t graze the plants when they are mature.

Topping is generally ineffective as plants recover and set viable seeds but a range of chemical controls are available.

A project at Newton Farm, a beef and sheep farm farmed by the Roderick family, examined the efficacy of using different chemical controls to combat docks – comparing a standard product to one which doesn’t harm clover.

The field treated with a product containing Fluroxypyr and Tricloypyr at half-rate early in May led to the control of over 95% of docks.

“When reviewed this autumn it was felt that the control was still good and a second half-rate application wouldn’t be made,” said Mrs Hughes.

Another field was treated with full rate Amidosulfuron, a clover-safe product.

There was dock regrowth in more than half the ley and flowering at the base of the stunted docks although, as expected, there was no clover damage.

“This product was much slower acting and the docks may have grown away from it due to timing of application in what was a warm, late spring,” she added.

The project, she said, had shown that timing of application on the growth stage of the dock is critical - herbicides applied too early or too late don’t work as effectively.

“It is recommended to apply on an actively growing dock at about 20cm diameter,” Mrs Hughes explained.

Applying a herbicide at the reseeding stage is also important as they work more effectively on docks at the seedling stage: “It is more cost effective to apply at this stage,” she said.

Also, selecting a product which controls docks down to their roots – known as translocation - gives better long-term control.

“Docks are a bit of a super weed and a carefully planned control strategy working with your reseeds and grazing style over a number of years will show the best results in keeping on top of them.“

Each chemical comes with guidance on the necessary buffer zone between treatment areas and watercourses; it is vital that this is observed because some products are very toxic to aquatic life and the effects are long lasting, said Mrs Hughes.

“They can be used safely providing care is taken to prevent spray drift reaching surface waters,“ she added.