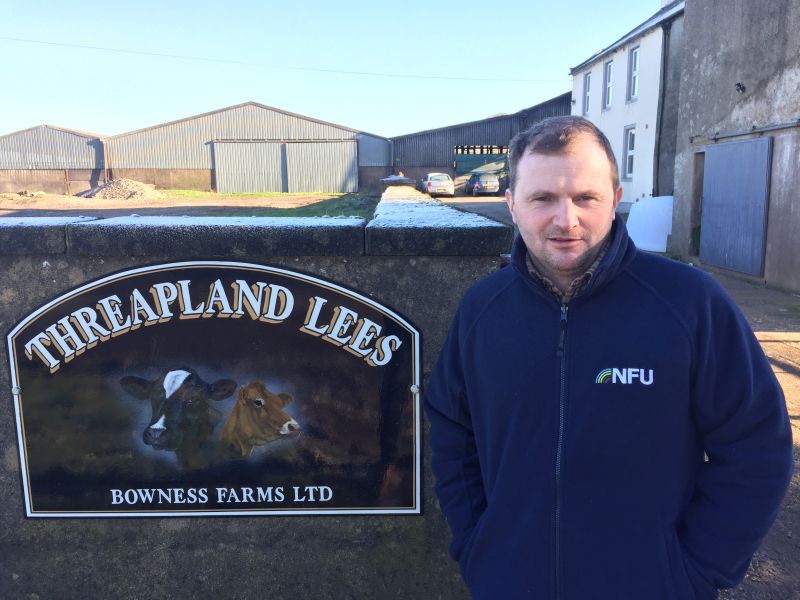 Dairy farmer Ian Bowness has been confirmed as the new NFU Deputy Cumbria County Chairman – a role he’ll fulfil for a year before taking on the top job in February 2020.

Ian Bowness, 47, milks 280 Holstein Friesian cows at Threapland Lees near Aspatria. He sells his milk to Arla and keeps some Jersey cows for ‘a bit of colour’.

The family run business consists of three farms, covering just over 600 acres with a mix of owned and rented land.

Current NFU Cumbria County Chairman David Raine of Old Parks in Kirkoswald near Penrith, has agreed to do another year for the organisation in order to assist Mr Bowness.

And despite being an NFU member for many years, he has not held any official positions or sat on any boards for the union until now.

Before buying Threapland Lees 25 years ago, Mr Bowness was a tenant on a mixed farm in south Cumbria near to Ulverston.

When he and his wife Tina bought the farm, they knew there was a family connection but had not realised that the holding had been owned by the Bowness family since 1881.

There is a plaque on the farm confirming this fact. The farm changed hands several times after that before eventually coming back into the Bowness family.

Mr Bowness said: “I have a working knowledge of farming in both Cumberland and Westmorland. I’m an owner occupier and have also been a tenant.

“Alongside the cows we keep a handful of sheep on the farm to keep the kids amused and I don’t think I’ve ever had a year when I’ve not been lambing.”

Maize, spring barley and winter wheat is all grown on the farm to make feed for the herd.