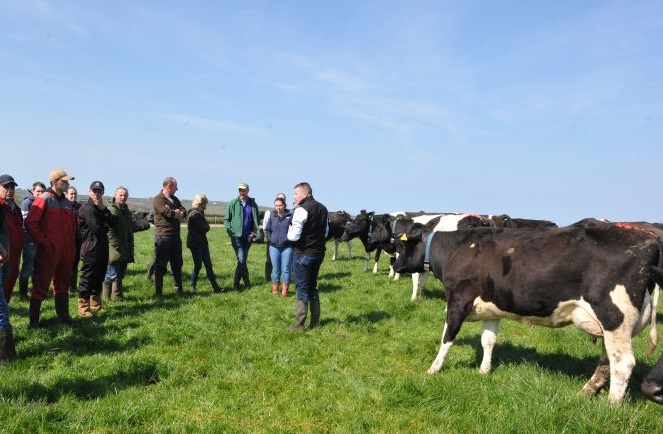 There is a 'very strong link' between grass utilisation and profit, farmers heard

Welsh grassland farms could increase their annual net profit per hectare by up to £235 if they increased grass utilisation by just one tonne of dry matter (DM)/ha.

At Moor Farm, near Haverfordwest, the Rees family have invested in infrastructure including cow tracks to extend the grazing season in early spring and late autumn, increasing utilisation of the grass the farm can grow.

There is a very strong link between grass utilisation and profit – the most profitable farms achieve 80-85% utilisation – farmers were told at a recent joint Farming Connect and AHDB open day at Moor Farm.

While many farmers are achieving their ambition of growing more grass, using that grass can be a stumbling block, suggests Dr Noel Gowen, of Grasstec.

He advised farmers to maximise grass intake by adopting a mindset of “if I can graze then I will.” “If the ground conditions are good enough to go, then go,” he said.

Andrew Rees, who farms Moor Farm with his mother, Jean, grazed cows by day on February 11th this year thanks to improved grassland management and a new network of tracks.

Mr Rees measures grass up to 40 times a year, inputting that data into Agrinet software to identify how much grass each field is growing.

At the end of the grazing season, Mr Rees’ Agrinet programme produces a graph showing how many tonnes of grass each field has grown during the year, facilitating management decisions such as reseeding.

He targets a first grazing round of 70-80 days and 24 days for subsequent rotations – at 4.4 cows/ha he is heavily stocked on the grazing platform so there are additional feed inputs – in mid-April cows also received 6kg of concentrates, 2kg of maize and 2kg of grass silage per head per day.

Farmers should target a daily grass intake of 16-17kg DM/cow “at every opportunity”, said Dr Gowen.

Grass grazed in the first rotation is the cheapest feed of all – it can cost as little as £10-£20t/DM - but if it is not utilised because cows are not turned out early enough then the opportunity for cheap feed is lost and the feed quality and yields of subsequent rotations will be poorer.

“Only provide extra feed if cows are not able to get their intakes from grass,” Dr Gowen advised.

To capitalise on grass yield and quality, he urged farmers to scrutinise seed mixes when considering reseeding programmes.

“Take control of the seed mix you use by carefully selecting only two or three of the best varieties according to the NIAB lists within the UK or also the Pasture Profit Index from Ireland. Ask your merchant to blend them together for you in the one mix,” he said.

To maximise the potential of grass, whether in a reseed or an existing ley, soil pH should be at 6.2-6.5, Dr Gowen added.

At under 6, 50% of phosphorous applied to fields is not usable, he pointed out. “Typical NPK fertilisers are costing close to £290 a tonne but considering the effect of low pH on phosphorus uptake, it will in fact be costing nearly £600 if the pH is not right.”

Cows should graze swards to a residual of 3.5 - 4cm – from the end of April swards will start to produce seed heads; these can be can be identified as nodes on the stalk. “Look for the bulge on the stalk, the seed head is just above the highest node.”

The feed quality of the vegetation below the seed head is poor therefore Dr Gowen recommends grazing low to remove the seed head at every opportunity, to promote regrowth and to minimise poor quality grass in cow diets.

In heavily stocked systems, regrowth is sometimes grazed too early but doing so will stunt grass growth, Dr Gowen warned. Perennial ryegrass leys should typically not be grazed for at least 20 days.

Funding for the project has been provided by the Welsh Government’s Rural Communities Rural Development Programme 2014-2020.