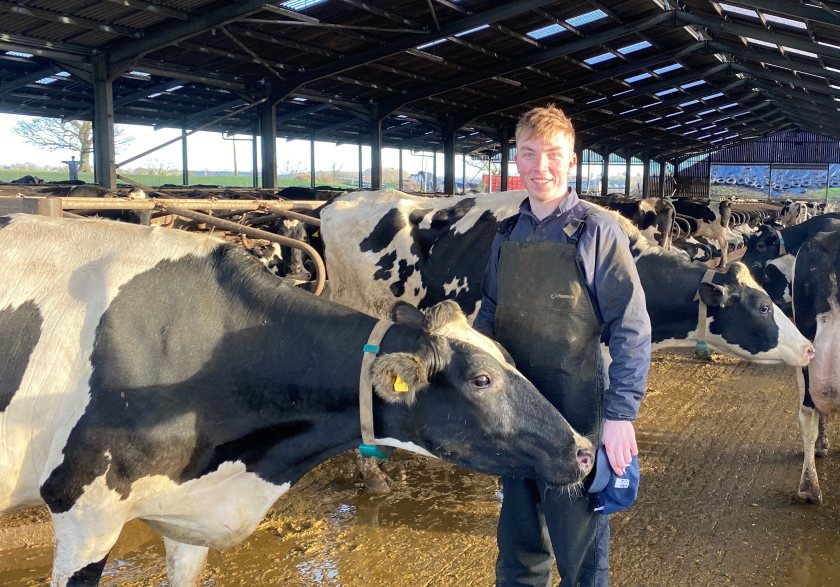 Dedication sees Max Mitchell, from a non-farming background, shortlisted for the Dairy Student of the Year award

A Harper Adams student from a non-farming background has been named as a finalist in this year’s Dairy Student of the Year competition.

Max Mitchell, from Shrewsbury in Shropshire, was one of two students chosen from a shortlist of six to go ahead to the prestigious prize’s final on 2 February.

He was selected after impressing a judging panel at a London event at the Farmers' Club with a presentation on how the dairy industry may need to adapt to future challenges.

Max, who is studying Agriculture with Farm Business Management, said: “After being shortlisted, we were invited to submit an essay response on a case study dairy farm.

“This involved evaluating technical performance and suggesting necessary improvements for this dairy business.

Successful candidates were then invited to the Farmers' Club to do a 15-minute presentation, followed by 10 minutes of questions on whether the future is bright for British dairy.

“Doing the presentation itself was nerve wracking and I had been worried about it for many weeks prior, juggling it with incoming assignment submission deadlines," he said.

“Despite this, I was confident in my ability to get ideas across and provide industry insights in front of the judging panel.”

The final winner will be announced at Dairy-Tech 2022 in Warwickshire, and will get a £750 prize as well as a six-month paid placement with award sponsor Mole Valley Farmers.

Max added: “Hailing from a non-farming background, receiving recognition for this award will be a culmination of long hours, hard work and dedication to dairy farming.

“The award has been an ambition of mine for a long time, as one of my former dairy mentors previously won this award.

“I had made it a personal objective to attempt to participate as and when the opportunity arose.”