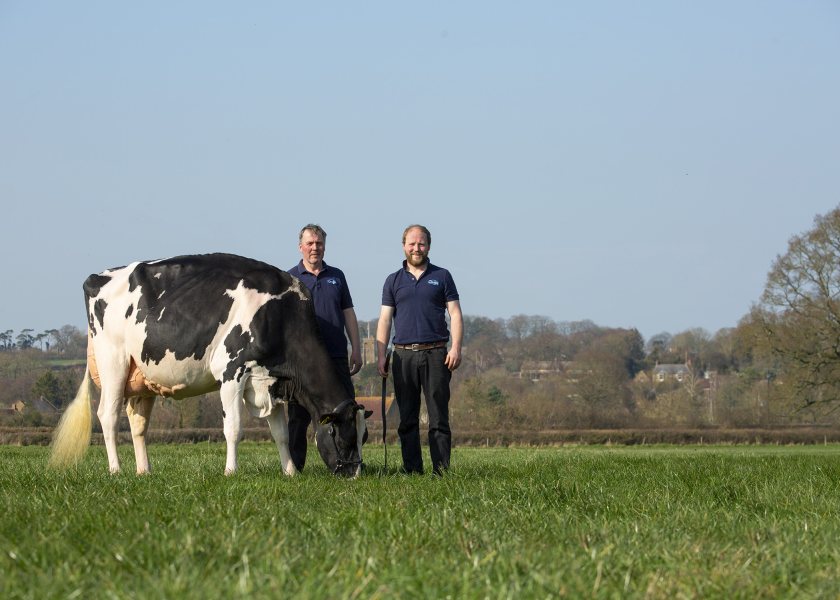 The Davies family of the award winning Davlea herd are gearing up to open their farm gates for the Holstein UK Premier Herd Open Day later this month.

The Davlea herd were announced as the 2021 winners of Holstein UK’s Premier Herd Competition and now look forward to welcoming visitors to view the herd on 28 July from 10:30am.

The Open Day will run in conjunction with the Davlea Celebration Sale which will begin at 2.00pm and will feature 45 lots from the winning herd.

Ian Davies, and son Max, run their 140 head herd which was established by Ian’s father Bryn in the 1970s.

The farm was initially based in Sussex and is now settled in Somerset following a relocation in 2004.

The herd calve all-year-round and have access to TMR with supplementary grazing during the summer months.

Around 300 acres is farmed with a mixture of owned and rented land and contract-grown maize with an aim to produce healthy, balanced and strong cows with quality udders.

With prominent families including Alicia, Ashlyn, Loana, Lulu, Pledge and Raven, classification is an integral part of the business.

There are currently 60 EX and 80 VG animals in the herd and the Davies’s have seen great success on the show circuit and in previous herds competitions.

A major highlight for the herd was winning the National Holstein Show at UK Dairy Day in 2018 with Davlea Bradnick Alicia as well as taking home the Premier Breeder and Premier Exhibitor titles.

National Premier Herd Judge and 2019 Open Day Host, David Wright of the Berryholme herd, visited each of the finalists: "The Davlea herd was phenomenal," he said.

"They were very much my type of cows with a stamp of high class udders, balanced dairy frames and great feet and legs throughout with lots of outstanding individuals too.”

Ian and Max are delighted to welcome guests for the open day near Ilminster, supported by many of Davlea’s suppliers who are sponsoring the event.

Max said: “It was a great surprise to be named the national winners of the Premier Herd Award and we have been preparing for the Open Day ever since.

"All of us here at the farm are delighted to be welcoming everyone to Somerset and we look forward to giving members, young breeders and other dairy enthusiasts the chance to see the herd.

"The sale will feature some of the best in the herd including daughters from both D. Bradnick Alicia and D. Sidekick Wattle."