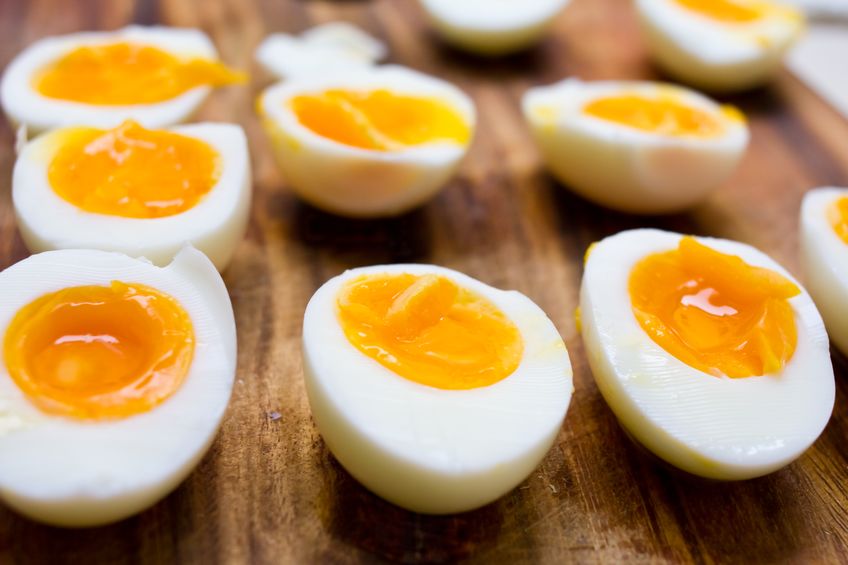 The main sources of dietary phosphatidylcholine are eggs and meat

Eating more eggs could reduce the risk of dementia, according to new research carried out by scientists in Finland.

An estimated 850,000 people in the United Kingdom currently suffer from dementia, according to the Alzheimer's Society - as many as 42,000 people below the age of 65.

The incidence of the disease is helping to drive what many believe has become a crisis in social care, with people having to sell their homes to obtain care as dementia takes hold in later life.

But Finnish scientists believe diet may help reduce the risk.

Researchers at the University of Eastern Finland have found that the risk of dementia is nearly 30 per cent lower in men with a higher intake of dietary phosphatidylcholine.

The main sources of dietary phosphatidylcholine are eggs and meat.

The most common cause of dementia is Alzheimer's disease. The specific symptoms that someone with dementia experiences will depend on the parts of the brain that are damaged, but the word ‘dementia’ describes a set of symptoms that may include memory loss and difficulties with thinking, problem-solving or language.

These changes are often small to start with, but they become severe enough to affect daily life. A person with dementia may also experience changes in their mood or behaviour.

The Alzheimer's Society has called on the new Prime Minister, Boris Johnson, for urgent investment in quality, specialist dementia support through a dedicated Dementia Fund.

Meanwhile, the new Finnish research observes that the dietary intake of phosphatidylcholine is associated with a reduced risk of dementia.

Phosphatidylcholine is also linked to enhanced cognitive performance, according to the findings of the team in Finland.

Maija Ylilauri, a PhD Student who led the research, said it was still early days: “This is just one observational study, and we need further research before any definitive conclusions can be drawn,” she said.

However, the research team, whose results have been published in the American Journal of Clinical Nutrition, concluded that higher phosphatidylcholine intake was associated with “lower risk of incident dementia and better cognitive performance.”

The scientists who carried out the work looked at data derived from a study on heart disease risk, which was carried out between 1984 and 1989.

The work analysed data kept on 2,500 Finnish men between the ages of 42 and 60. The team looked at dietary and lifestyle habits and health in general.

The data was combined with the men's hospital records, cause of death records and medication reimbursement records over an average period of 22 years.

The new analysis now shows that the risk of dementia is 28 per cent lower in men with the highest intake of dietary phosphatidylcholine, when compared to men with the lowest intake.

Men with the highest intake of dietary phosphatidylcholine also excelled in tests measuring their memory and linguistic abilities.

The Finnish team says that the findings are significant, given that more than 50 million people worldwide suffer from a memory disorder that has led to dementia, and the number is expected to grow as the population ages.

The scientists say the new findings may play a vital role in the prevention of dementia.

Successful dementia prevention is a sum of many things, they say, and even small individual factors can have a positive effect on the overall risk, possibly by preventing or delaying the disease onset.

Choline is an essential nutrient, usually occurring in food in various compounds. Choline is also necessary for the formation of acetylcholine, which is a neurotransmitter.

Previous work carried out at Boston University indicated that eating a diet rich in choline could help protect the brain from the effects of ageing.

The study team looked into whether any relationship existed between dietary choline intake, cognitive function and brain morphology - and the results showed that choline could improve memory performance.

Whilst the research team was keen to stress that the findings did not necessarily mean that choline was the answer to staving off Alzheimer's disease, it did say that the results added to other evidence suggesting that an individual's lifetime diet may make a difference to how his or her brain aged.

Choline is nowadays used in a multinutrient medical drink intended for the treatment of early Alzheimer’s.

However, eggs are rich in the nutrient. Two large eggs contain more than half of the intake recommended for pregnant women for the development of the unborn child.