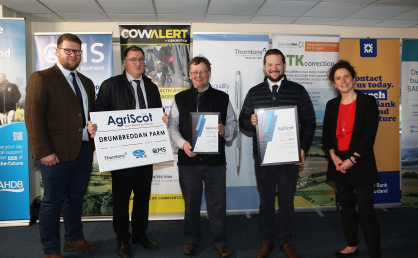 By calving in three distinct seven week blocks, the farming family have created a unique system on their farm

An efficient business that creates a monthly beef cheque and is as self-reliant as possible is the name of the game for this year’s Scottish Beef Farm of the Year.

They generate a consistent cash flow throughout the year - something Lamont Hair was keen to replicate from his dairy farming background.

“There’s wages and bills to pay every month. If you can sell 30 fat cattle per month it makes paying your bills easier,” he explains. It also makes more efficient use of the farm’s facilities.

By running 120 cows in each block, the aim is to produce around 60 heifers and 60 bulls which are born and can be finished in a short period.

The idea is to have 30 animals ready for finish at one time, providing the perfect number to go on a lorry.

“It’s all about efficiency,” Mr Hair explains. “We are a long way to any slaughter house so if we want a lorry, we want 30 on at each time.”

Bull selection is taken seriously, with Mr Hair sourcing most of his stock bulls from the Stirling Bull Sales and spending around 6,000-8,000gns per head.

Estimated breeding values (EBVs) are assessed, as well as the look of the bull, with particular emphasis placed on calving ease and 400 day weight gain.

All cows are dairy cross Aberdeen Angus or Limousin and are bought from neighbouring dairy farms.

The family has come to an agreement with one neighbour which allows them to choose the Aberdeen Angus semen to be used on the dairy herd.

This enables them to look closely at calving figures for future herd replacements. Buying-in replacements means they can “focus entirely” on producing beef.

Mr Hair is keen to focus on maximising milk production per cows with the view to making the most of calf performance off the dam. “I see a cow as something that’s there to produce milk.

"If I want her to produce 20 litres of milk I’ll feed her grass silage and whatever barley she needs to get that so I don’t have to feed creep,” he explains.

This is particularly necessary considering most cow are out all-year-round. In fact, the herd is out-wintered on barley stubbles and fed silage from feed trailers, with home-grown Maxammon treated barley on top.

Stock are only housed for finishing. They aim to be as self-sufficient as possible, using home-grown barley for finishing and straw bedding and only buying-in fertiliser and feed-grade urea to top up ration protein levels.

Bulls are weaned at 7-8 months old and finished on the ad-lib barley, whilst heifers have a 6-8 months store period on grass or silage. They then move onto an ad-lib barley ration with straw.

Their efficient strategy is also proving beneficial to the bottom line, with their Scottish Farm Business Survey benchmark report showing their total farm income, including subsidy, is almost three times the average of the upper quartile.