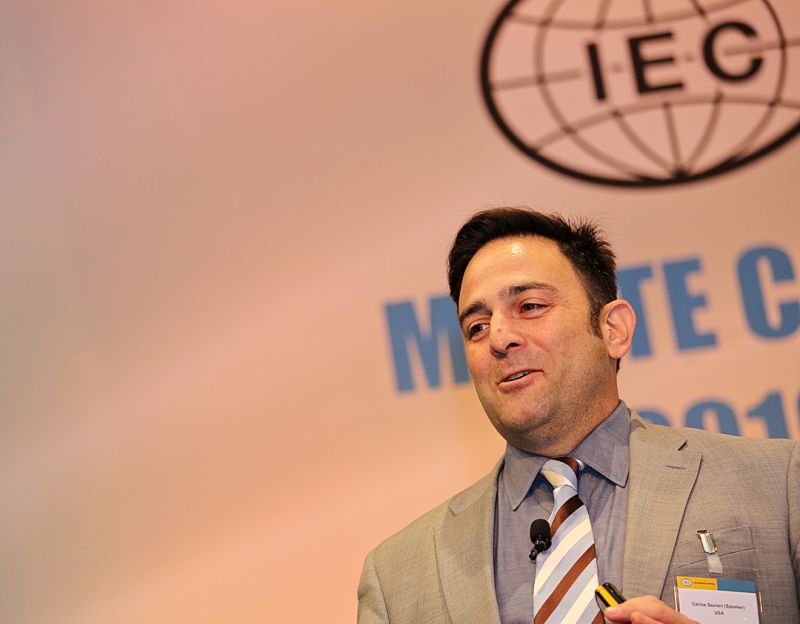 Carlos Saviani, a US based food sustainability consultant, said the egg industry has survived other controversies in the past

Eggs are an 'irreplaceable' animal protein in the face of rising veganism, according to Carlos Saviani, a US based food sustainability consultant.

Formerly the Food Sustainability Executive for the WWF, Saviani told delegates at the International Egg Conference in Monaco that there is now scientific consensus advocating the benefits of consuming plant-based proteins.

For example, non-profit foundation EAT published a paper in the Lancet which recommended increased consumption of plant-based while limiting animal source foods.

But Saviani pointed out that the egg industry had survived and beaten off the cholesterol scare of the 1970s, the salmonella scare of the 1980s, and the welfare attacks in this decade.

He asked the audience if the humble egg can also adapt and survive the vegan movement.

While developed countries are responding to veganism because of health and carbon emission concerns, developing countries in Asia and Africa are still are protein deficient.

He argued that on a global scale, the need for animal protein in the developing world countered the reduced requirements in the developed world.

“The Chinese think that part of the reason why they are shorter than other nationalities is a lack of access to milk and eggs,” he said.

“If you drink a cup of milk a day, or have an egg a day, you will get taller. There is good evidence that animal-source foods reduce stunting”.

Per tonne of protein consumer, eggs require approximately 15 ha of land, 40,000m3 of freshwater and produce 250t of GHG (Co2) emissions, according to the World Resources Institute. This is nearly double the requirement/production of maize or pulses.

But a switch from animal to plant protein is not that simple, according to Jason Clay from WWF. “Not all proteins are equal – equally nutritious or impactful. All food production has impacts,” he said.

“We need to avoid top-down assumptions about shifting between food groups, particularly when calculating global need.”

The environmental impacts of omnivorous, ovo-lacto (egg/milk) vegetarian, and vegan diets were analysed by a 2017 scientific paper in the research journal Nature.

The omnivorous choice generated worse carbon, water and ecological footprints than other diets. No differences were found for the environmental impacts of ovo-lacto-vegetarians and vegans.

However, a high inter-individual variability was observed, showing that some vegetarians and vegans have higher environmental impacts than those of some omnivores.

But despite the egg industry's good environmental credentials, a recent poll shows that 54% of Americans are still actively trying to consume fewer animal-based foods and more plant-based food.

The answer seems to be for health reasons, and applies across the developed world.

Saviani showed that there is plenty of evidence that eggs are good for health. Eating eggs can increase HDL (‘Good’) cholesterol, reduce blood pressure, and improve eye health, he said.

More importantly, protein from eggs is regarded as a ‘high quality’ protein which is easily digested and contains all the essential amino acids to build muscle. 20-30 grams of high-quality protein are required to maintain healthy muscles and bones in adults.

In a trial in the USA, dieters who ate eggs rather than bagels or cereals for breakfast lost 65% more weight, reducing their Body Mass Index by 61%. They claimed to feel more energetic and had a 30% increase in ‘fullness’.

And its good value. The World Resource Institute showed that eggs produced some of the lowest cost per gram of protein, less than meat, fish and nuts.

Saviani told delegates that rather than being threatened by veganism, the industry should treat consumers’ concerns over nutrition as an opportunity to promote eggs as the most sustainable, high quality protein on the planet.

“Let the world know that eggs are an irreplaceable animal protein”, he concluded.