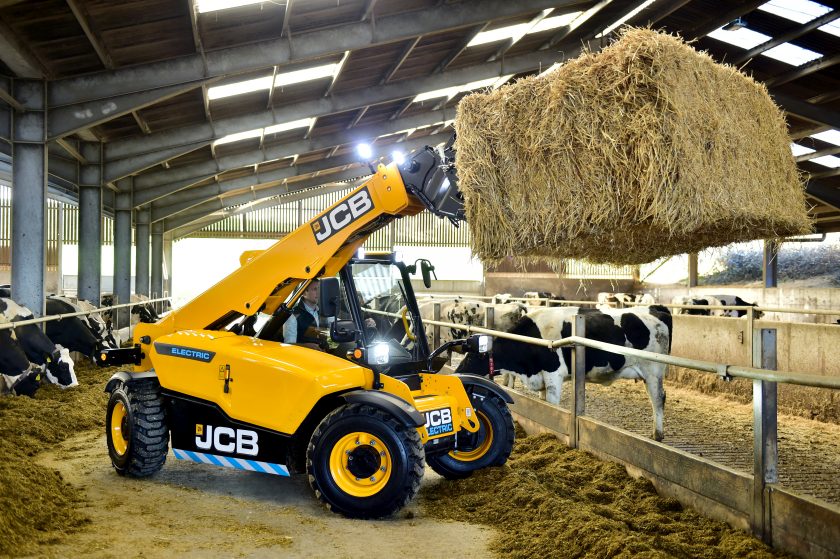 As hybrid and electric cars are becoming a regular site on UK roads, electric telehandlers offer the first glimpse of battery powered technology on farms.

In November it was announced that by 2030 there will be a ban on the sale of all new diesel and petrol cars.

At the same time hybrid and electric cars are becoming an evermore common sight on our roads, with shares in Tesla rising more than 550% throughout 2020.

Clearly, government policy is pushing transport towards battery power and surely it is only a matter of time before agriculture has to start falling into line alongside it.

The first on the market

GGR Group are a company that supplies machinery to the construction industry.

They have recently begun selling the Faresin 6.26 electric telehandler, the first machine of its kind in the mainstream market.

Their Marketing Director Daniel Ezzatvar, said: "Once upon a time, electric vehicles were designed for sensitive situations, such as food processing and handling, working down mines, or on oil rigs.

"Yet now government is driving this carbon neutral agenda it is going to become the norm."

Faresin are an Italian company that already have a range of telehandlers with combustion engines in the agricultural sector.

In 2019 they became the first company to develop an electric telehandler.

"As a company GGR Group specialise in bringing in products from abroad", Daniel explained. 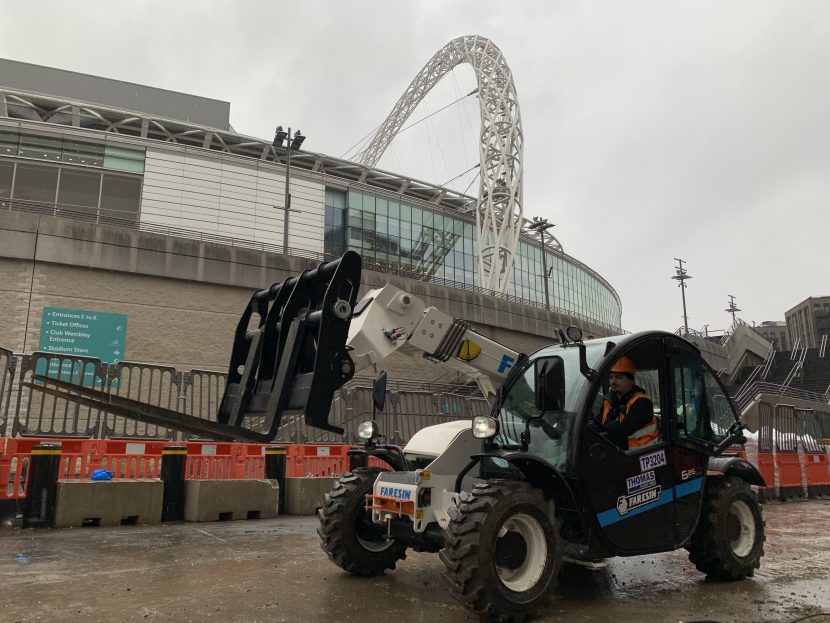 The Faresin 6.26 electric telehandler, the first machine of its kind in the mainstream market.

"In 2019 our CEO came across Faresin launching the electric telehandler, they like us are a medium sized family business, and so we partnered up."

The electric telehandler uses the same technology as Faresin’s conventional diesel 6.26 telehandler, the only difference being that this version is battery powered.

It is only 2.6 tonnes with a 5.9 metre reach, but as battery technology develops it is expected that larger machines will come to the market.

The standard model comes with a 300Ah battery which has a life of up to six hours and a standard recharge time of 3h 45mins, however this can be reduced to 1.5 hours by using a three phase fast charger.

The lithium batteries it uses can be charged without any damage or life reduction, unlike standard wet cell batteries.

Although GGR specialise in kitting out the construction industry, they have exclusivity over Faresin’s electric telehandler in the UK, and they say they have had an influx of interest from farmers.

Sam Edwards, also of GGR Group, said: "They are ideal for livestock farmers. One Scottish farmer has ordered the telehandler to try and tackle noise pollution as he was finding his animals were easily spooked by the noise of the engine on his conventional handler.

Sam said that the other group of farmers showing a particular interest in the telehandler are those with anaerobic digester’s on their premises. 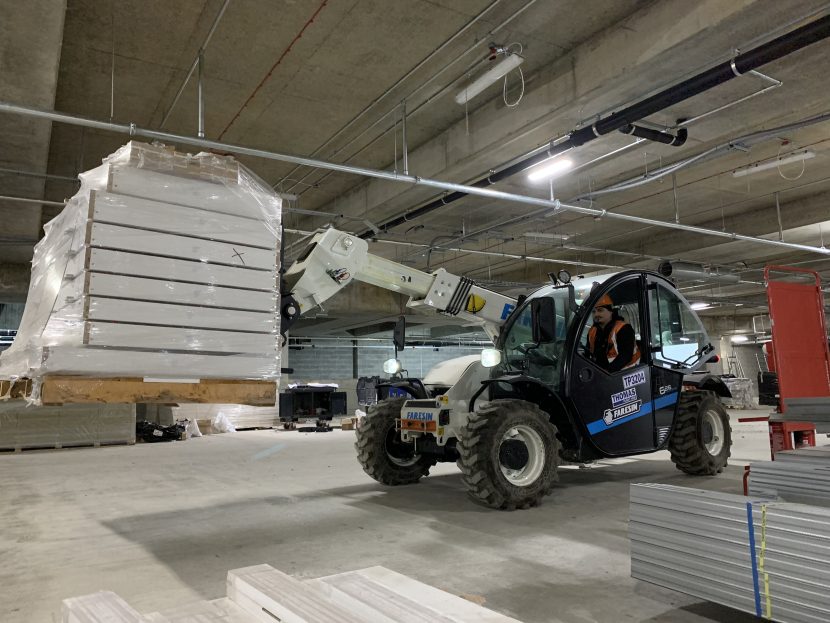 These farmers see the benefit of being able to run their telehandler at very little cost.

Although the electric telehandler is yet to arrive on any UK farms, there are a number of them on construction sites around the country, including the HS2 rail development.

Thomas Plant are a plant hire company that have been using the Faresin electric telehandler on a site in Wembley.

Ian McMillan, from Thomas Plant, said: "The operator who was driving it absolutely loved it. Power and performance wise, everything he did with it was done exactly the same, if not better, than with the diesel version.

"We had it working both outside and in an underground car park, doing everything we needed of it."

Ian had very few concerns about the telehandler and was impressed by its charging technology: "My only concern was how quiet it was", he said.

"But now GGR have come up with a type of travelling alarm that also manages not to really annoy people."

"In terms of charging, we have used the extra fast charger and it does exactly what it says on the tin, and overnight we just charged it like any other electric forklift or scissor lift.

"The data and telematics on the charger are something I have never seen before, it tells you exactly when and for how long it has been on charge," he said.

Ian said he saw benefits to be gained from the durability of the electric technology.

"Because we are a plant hire company, we do not like having anything more than three years old, but the batteries on these last ten.

"It will be another six years before we even think about swapping it out, the maintenance is so minimal."

Whilst the Faresin 6.26 is the first electric telehandler on the market, the bigger companies are not far behind.

Both Manitou and Merlo have electric telehandlers in the development stages, and in November last year JCB launched its 525-60E Loadall. 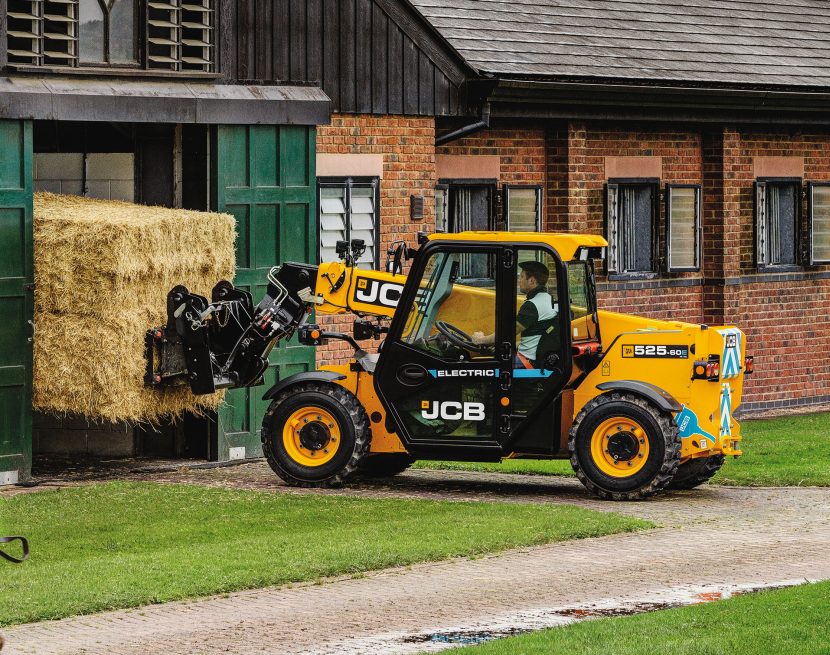 Like the Faresin, JCB have designed this to deliver the same performance as their conventional diesel powered machine, with a 2,500kg maximum lift, and lift of 2,000kg to the full 6 metre height.

JCB’s Chief Innovations Officer, Tim Burnhope, said: "This release follows the introduction of the 19C-1E mini excavator and the 30-19E Teletruk to the market.

"The Loadall offers a zero emissions load handling solution with no compromise on productivity. We are very excited by the prospects for this machine."

The JCB telehandler uses very similar technology to the Faresin machine, including using a rapid charging system that can be used for quick top-ups during breaks.

It also uses regenerative braking which converts the energy lost whilst braking back into energy in the vehicle’s battery, helping to improve the lifespan of the battery.