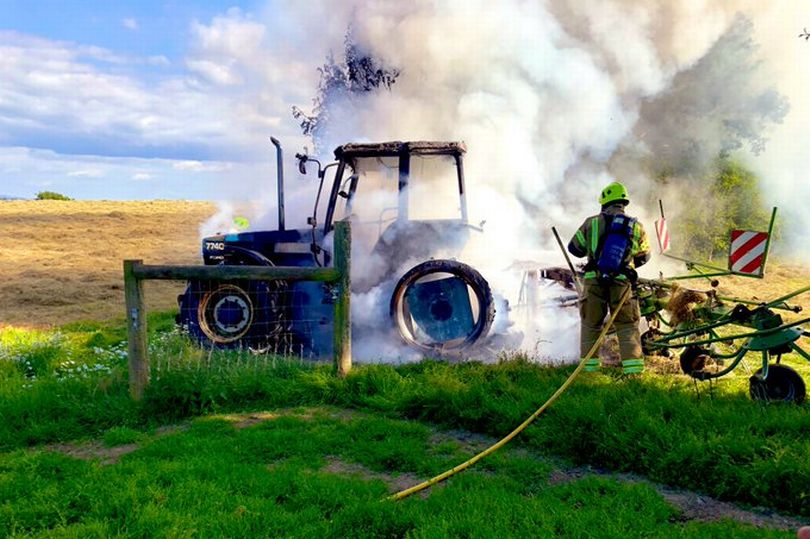 Electrical accessory wiring is one of the main reasons behind the increase in tractor fires seen on farms across the UK, new research has revealed.

NFU Mutual has examined the causes of almost 1,000 tractor fires after the insurer paid out nearly £19m in claims last year due to these incidents.

A common factor in a number of fires in modern tractors was electrical accessories wired directly to the tractor battery cables.

When combined with the heavy current drawn from modern tractor electrical systems, these extra loads can lead to overheating and fires.

NFU Mutual is now working with machinery manufacturers and dealers to identify potential problems in tractors.

It is also urging farmers to get the wiring of tractor accessories checked and to ensure any new electrical equipment is wired through an ISOBUS connector.

Bob Henderson, technical engineering manager for NFU Mutual, said that over the last few years, the number of tractor fires had shot up.

"This is putting lives of people and livestock at risk as well as leading to expensive damage and disruption of farming activities," he added.

“It’s often very tricky to find the exact cause of tractor fires because the intense heat makes forensic examination difficult.

“Traditionally accidental tractor fires have been attributed to overheating bearings and other moving parts starting fires – or chafed wiring causing a short circuit."

However, engineers have been concerned that there could be another factor behind the rise in fires, particularly those seen in tractors just a few years-old.

During an investigation of these cases NFU Mutual found a number of fires had been caused by resistive heating of the battery terminal.

In every case the battery terminal had either been altered or had had an additional power feed added.

"This can compromise the efficiency of the battery clamp, making a poor connection and increasing resistance," Mr Henderson explained.

"This then causes a build-up of heat to the battery clamp and terminal, which ultimately can catch fire."

Older equipment is not so power hungry and drawing additional power supplies from the battery was an accepted method, but this is not so now, he said.

"Manufacturers have now combatted the problem by fitting power strips to cabs and have also started to use ISOBUS connectors – both of which avoid overloading the battery wiring.

“These power strips and ISOBUS connectors can be fitted new or as an aftermarket fitment to any machine," Mr Henderson said.

For advice on wiring electrical accessories to tractors, farmers have been urged to contact their tractor dealers.

How can I prevent tractor fires?

• As part of your regular maintenance schedules check the battery terminals are tightened to the correct manufactures torque settings.

• Check the routing of wiring harness, connections, ensuring clips, fixings and grommets are secure and free from damage.

• If an electrical system is not working correctly find out why, don’t ignore these early warning signs, investigate the cause, because it could lead to a major issue.

• Modern electrical systems are very complex and may require the use of a fully trained technician and specialist diagnostic equipment to track down a problem.

• Maintain a strict cleaning regime, by removing the build-up of any material from the engine bay, exhaust systems, axles and under cab area, which could be a fire risk.

• When checking the machine’s fluid levels, if a top up is required question why. Is there a potential leak within the system, which could lead to a fire risk?