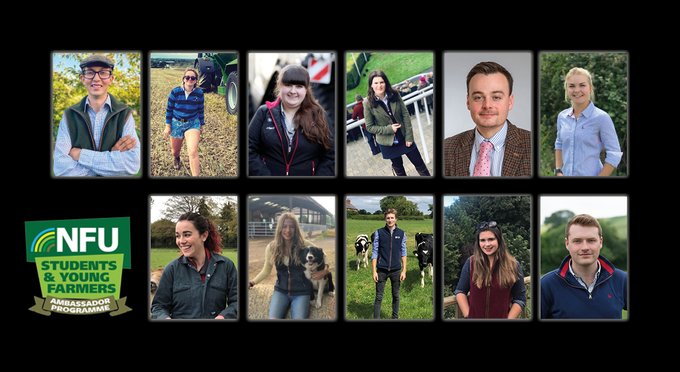 Eleven young people will represent the next generation of farmers after they were selected as the NFU's new Student & Young Farmer Ambassadors.

The 11 ambassadors were chosen from a pool of more than 130 applicants and represent every region of England and Wales.

The NFU Student & Young Farmer Ambassador Programme gives the industry fresh new voices to help back British farming and share their concerns for the future.

The new ambassadors will begin their tenure with a two-day induction and training session, however this will happen via video link from their homes due to Covid-19.

NFU president Minette Batters said the new group would be representing British farming at a 'unique and critical point in time' for the industry.

"Those taking part played a vital role in helping us tell the incredible story of British farming at public events, in magazines and across national, regional and trade media and on social media.

"From the start of 2021, UK agriculture is going to be finding its feet in a new world outside of the EU and we will need this next generation of farmers to be advocates."

Mrs Batters said it was 'great' to see young people making their mark in the farming industry and reaching out to different audiences.

"The programme aims to give them a fantastic opportunity to amplify their voice and I can’t wait to start working with them,” she added.

The programme gives young people between the ages of 18 and 26 years the chance to become a leading voice for farming in Britain.

Over the course of one year, ambassadors will have the chance to undertake numerous initiatives, such as attending the NFU Conference and Lord Mayor's Show.

Who are the NFU's new ambassadors?