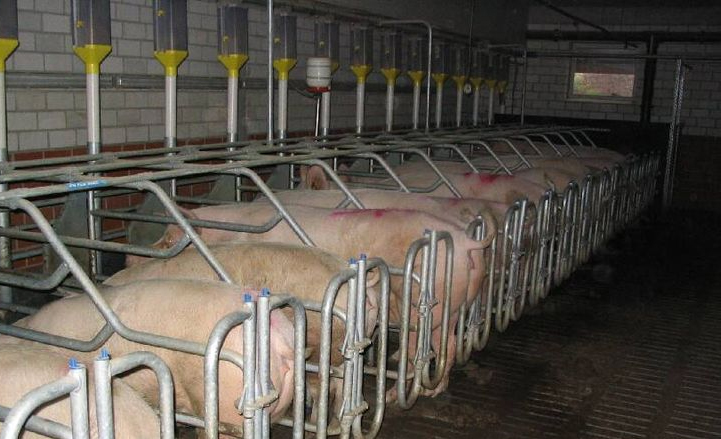 From New Years Day up to 40 percent of European Union pigs will come from farms flouting animal welfare rules according to the National Pig Association.

The NPA has called on shoppers to look for the independent Red Tractor logo to avoid what it calls the 'trade in illegally-farmed pigs'.

Around 40,000 pigs an hour will be delivered to continental processing plants from farms breaking welfare rules.

The pigs will come from European farms where sows are still confined in individual steel cages known as 'stalls', a practice outlawed by EU animal welfare legislation from 1 January 2013.

Stalls have not been used in the UK for many years, but figures released by Brussels this month show 80% of EU countries have not yet complied with the ban.

"As the United Kingdom imports around 60 percent of its pork — much of it as processed food such as ham and bacon — shoppers will need to be very careful about what they choose from supermarket shelves and when eating out in restaurants."

A call for an emergency summit meeting to prevent the importation was made by Matthew Curtis of pig-breeding company ACMC.

The European Commission health and consumer department has called member-states to a meeting on January 28 to discuss the issue.

Farm Minister David Heath has scheduled a meeting for February 6 to assess the level of civil disobedience taking place on the EU pig farms.

"Figures from the National Pig Association suggest that nearly 5 million sows will be kept under illegal production systems" said Curtis.

"They will produce roughly 96 million pigs - about 1.8 million a week. This is a staggering amount - equivalent to the entire production from Germany and Spain - the EU’s largest pig producers,"

"Imports of such meat will have serious implications for British pig farmers who follow high welfare practices and who have had to comply with a total ban on sow stalls for over a decade," he said.

"Due to cheaper production methods this lower-welfare meat could undercut UK-produced meat and the fiasco in the EU surrounding non-compliance with the battery-cage ban in 2012 will pale into insignificance compared with this."

Data shows France was only 33 percent compliant with the European stalls ban, Germany only 48 percent and Ireland only 57 percent.

Other countries unlikely to hit the deadline include Belgium, Italy, the Netherlands and Spain.

At its meeting this month, the European Commission is expected to claim the picture is not as bleak as the statistics suggest, because from January member countries will be able to start taking enforcement action.

The NPA has warned that some European countries 'do not have the necessary infrastructure' to identify law-breaking farms.

"We have been pressuring Brussels for more than a year to take measures to protect European consumers from illegally produced pigmeat. Its stock response has always been that it could do nothing until January 1, 2013. Well that date is now upon us and it needs to act urgently to have any chance of keeping its integrity intact," said Longthorp.

But the move to group-sow housing, following the January ban, doesn’t have to mean a drop in herd productivity according ACMC who attended the EuroTier livestock exhibition in Hannover, Germany.

"Much depends upon the temperament of the sows. Sows with aggressive natures can cause problems, causing a reduction in numbers born and reared. But sows with a docile temperament tend to perform better in group situations," said ACMC's managing director Matthew Curtis.

In Canada, for instance, researchers are looking into selecting lines that are less aggressive and suited to group-housing systems.