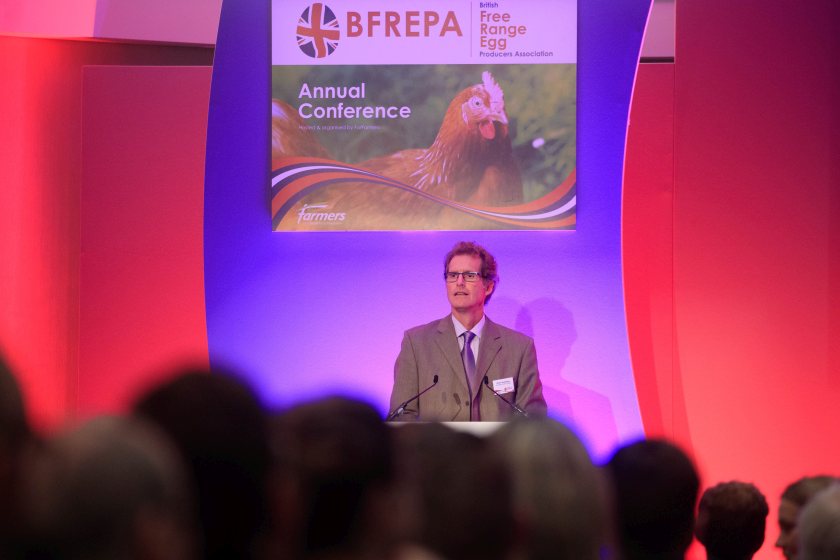 The winners of this year’s Free Range Awards have been revealed, celebrating excellence and rewarding the best and brightest within the egg industry.

Eight businesses and individuals nominated by their peers have been recognised for making positive contributions to the free range egg sector.

James Baxter, chairman of the British Free Range Egg Producers Association (BFREPA), said it was 'fantastic' to honour those who had made tangible differences to the sector.

“We are extremely proud of what producers have been able to achieve, especially during the past three years," Mr Baxter said.

"And we are honoured to present these exemplary individuals with the awards they very much deserve.”

The Marketing Initiative of the Year award went to Stonegate Farmers for its development of Respectful, the UK’s first Carbon Neutral egg.

By using free range white birds on a longer laying cycle, feeding them a home-grown diet and embracing renewable energy the team managed to reduce emissions by more than a half.

Producer of the Year award (0 to 32,000 birds) was awarded to Gareth Williams of EW ME & GR Williams from Powys in Wales.

Gareth’s commitment to education and his involvement with free range egg marketing with egg packers and supermarkets was especially praised by judges.

Alex & Chris Watts from A&C Poultry in Worcestershire won Producer of the Year award (32,000 to 64,000 birds) for their consistent high performance in egg production, exemplary management and focus on environmental sustainability.

The judges were also impressed by their pioneering efforts to reduce their carbon footprint and their involvement in trials to mitigate emissions in egg production.

Producer of the Year (over 64,000 birds) went to Ivory Arden of the Chirpy Egg Company from Lincolnshire. Ivory was recognised for her dedication to educating consumers about UK free range egg production, as well as her promotion of the egg industry through the use of social media.

The award for Employee of the Year went to Penny Humphrey of Joice & Hill, based in Peterborough, for her outstanding practical and honest advice to producers.

Penny has been involved in the poultry industry all her life and has become a true asset for the industry, dedicating herself to looking after the best interests of producers and flocks.

The Lifetime Achievement Award went to Tim Harvey of AD Poultry Processors. Based in Norwich, Tim has been involved in the UK poultry industry for over 40 years. Throughout that time he has been a huge advocate for the industry.

Tim was nominated by various individuals for his dependability and belief that the farmer and their flock are of the utmost importance no matter what their size or situation.

“There have been many times in which Tim has gone above and beyond to accommodate and help fellow producers and their flocks, such as when he worked towards getting his processing plant licence during the recent Avian Flu outbreaks in order to take birds from within the protection zone,” said Mr Baxter.

“He was the only processor to do so and it took time and effort, with no financial gain for himself or his business.

"This is just one example of Tim undertaking incomparable amounts of extra work to help his peers, and that’s why he was chosen to receive this year’s Lifetime Achievement Award.”

Keith Wild, the editor of BFREPA’s membership magazine The Ranger, was also recognised with a special Media Award.

Keith has been instrumental in ensuring producers have been kept up to date with relevant information during covid, bird flu and the cost of production crisis.

He launched a Telegram group used by more than 500 members as well as a price portal allowing farms to compare their egg price with their peers’.

BFREPA’s long-standing administrator, Alison Bone, was presented with a special award to recognise her 14 years supporting the organisation’s council.

Alison, who retired after the event, is well known in the poultry industry having held roles at the NFU as well as working for the South West Chicken Association.

Mr Baxter said Alison has left a lasting impression on BFREPA, not least having been the driving force behind the Free Range Awards and annual conference.

The awards preceded BFREPA’s annual conference, which was organised in partnership with ForFarmers.

"This year’s theme of resilience highlighted the importance of how as an industry we will sustain and protect what has made free range the success story it is.

“A thank you to all who attended this year, and our exhibitors who show their unwavering support for the event, every year.

"An additional thank you to the ForFarmers and BFREPA teams for making this year’s event possible.”