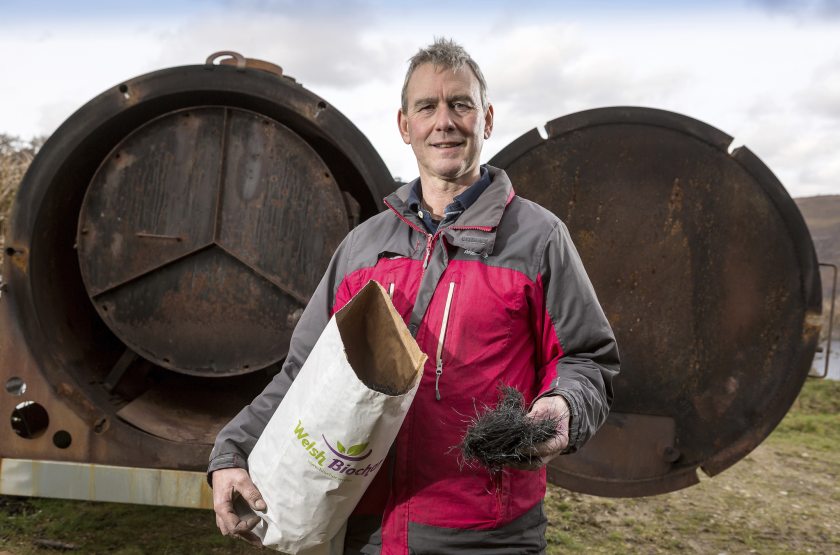 A Welsh farmer who is producing a type of charcoal which locks up carbon in soil says others could do more to convert farm and forestry waste materials into this resource.

The fifth-generation tenant processes it to produce biochar, a charcoal used to enhance the fertility and water retention capabilities of soil.

Removing this grass improves biodiversity, reduces fire risk and improves habitats for the golden plover whilst the biochar is sold on a small scale to gardeners and horticulturists.

When biochar is added to soil, it locks up carbon: “Biochar has been proven by academics worldwide to be a useful method of increasing carbon sequestration as it resists degradation and can lock up carbon in soil for thousands of years," he said.

Mr Davies said he was keen to understand more about opportunities for biochar production in Wales and its use in farming.

He received a Farming Connect Management Exchange bursary to expand his knowlede, which allowed him to visit Finland, Sweden and Ireland where he met experts.

He said with the right policies and financial incentives, biochar use was likely to become more widespread in agriculture, primarily as a method of increasing carbon sequestration.

“Agriculture in Wales has a range of waste products which could be utilised for processing into biochar," Mr Davies added.

“As well as making biochar for on-farm use, farmers are perfectly placed to produce biochar for use in urban areas."

But his research taught him that although biochar has proven benefits in increasing horticultural and crop yields, it may not be cost effective to use on grassland for increasing yields.

“The soil organic matter is normally higher on grazed land than cropping land due to the grazing and manuring effect of grazing animals," he said.

But waste from grazed farms could be processed into biochar and sold to horticultural farms and possibly mixed with composted animal manure, which is already happening in Europe.

Biochar is also used for animal bedding, and another potential opportunity is its inclusion in the diet of farm animals.

Studies across Europe have proven its beneficial effects in the growth of animals, possibly because it improves their digestion.

“Biochar fed to animals would ultimately be passed to the manure and onto the land, creating a carbon cascade effect," Mr Davies said.

“Farms in Wales could be more self-sufficient in bedding and fuel by exploiting the lower quality resources growing on their land."