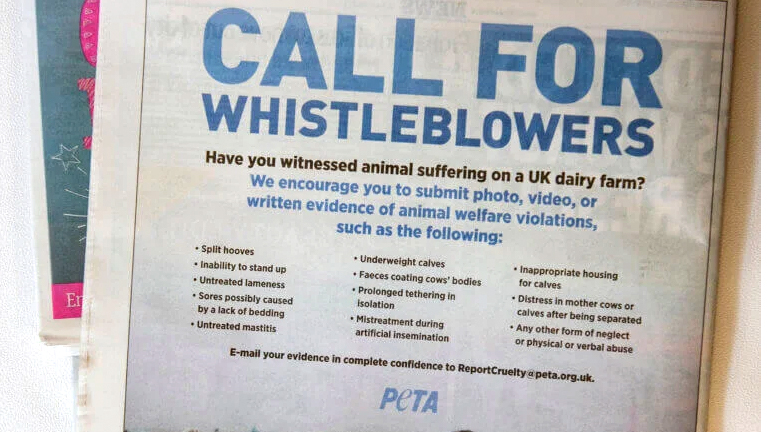 Farmers have reacted to PETA UK's call on social media for 'whistle blowers' to come forward against the British dairy industry.

The advert 'encourages' the public to 'submit evidence of animal welfare violations including split hooves, untreated mastitis and untreated lameness'.

"ATTN: We want to lift the lid on cruelty in the dairy industry," PETA UK said on social media with a photo of the advert attached.

"We're calling on whistle-blowers to come forward with reports of cruelty to cows on UK dairy farms."

Dozens of high-profile industry figures and social media users debated the nature of the advert, and whether it was reasonable and valid.

Because obviously if there is a serious animal welfare concern, my first thought would be to inform @PETAUK, who will just use the situation as promotional material to justify a vegan lifestyle, rather than reporting it to @RSPCA_official who will actually do something about it. https://t.co/5aVVxSYbxD

We need to expose & eliminate poor #AnimalWelfare, but it must be evidence-based.
?? How many people would recognise untreated mastitis?
?? Could your non-ag friends understand signs of distress in cattle?
?? What is “inappropriate” calf housing to the average High St shopper? https://t.co/bXXylk6U5t

Some social media users defended the advert, as farmers 'should support whistleblowing against bad practice'.

There are vets who are on farm almost weekly,they are far better placed to give an opinion on welfare than peta requesting everyday people to make judgments on an industry they have very little understanding off.

I would argue RSPCA are for that. Also you have the joy of people calling police et al to report cows are outside in the rain, pigs 'screaming' at feeding time etc. There are enough problems of reports made out of spite/personal vendettas

Gareth Wyn Jones, a high-profile sheep farmer from North Wales, said it was the newspaper - based in the same region as him - that he was 'shocked' with.

It’s the newspaper I’m disappointed and shocked with . But yes we can all sit and watch or we can do something each to their own ??