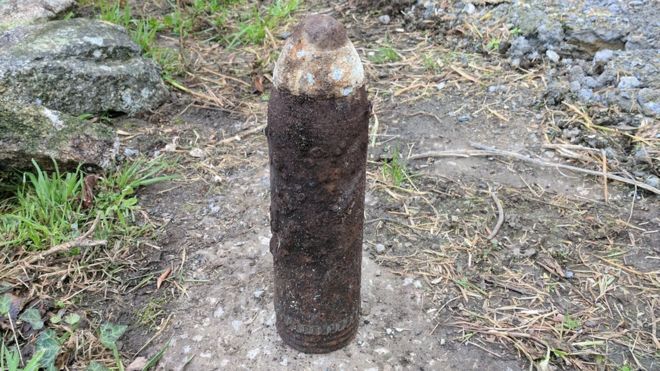 A live WWI bomb was found on a Devon farm, after being used as a door stop for decades (Photo: Ullacombe Farm Shop & Barn Cafe)

A farmer from Devon has discovered that his door stop is actually an old undetonated World War I era-bomb.

A controlled explosion had to take place on the farm in Bovey Tracey, Devon, after the farming family used the 100-year-old bomb as a door stop for decades.

The Royal Navy's bomb disposal unit detonated the device in a field.

Debbie Coles, manager of Ullacombe Farm Shop & Barn Cafe, told the BBC: "There's quite a history behind this bomb, apparently the grandparents of the owners used to use the bomb as a door stop".

They also posted their musings on Facebook: "Just another average day at Ullacombe! WW1 bomb found in one of the farmhouse garden walls still live!

"All safely detonated now but apparently many years ago used as a doorstop in the farmhouse.

"Anybody who thinks that Ullacombe is just a quiet little cafe in the country.. couldn't be more wrong!!!"

Andy commented: "OK, so that explains the window-rattling boom we just heard... thought WW3 was about to kick-off!"

Suzanne said: "Wondered what was going on! Glad all safely sorted!"

And Michael posted: "The day went with a BANG then!!"