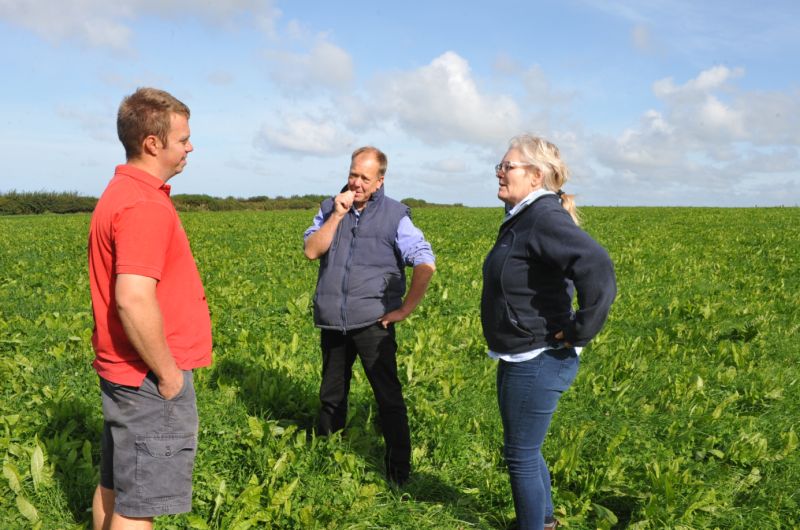 Reseeding with multi species leys at Moor Farm in Pembrokeshire

Andrew Rees reseeded 5.7 hectares (ha) in the spring with a diverse seed mix including chicory, red clover and plantain.

It was part of his programme to improve land he had bought and to rejuvenate an older ley where soil health was poor.

Project work with the Welsh government's Farming Connect scheme involved comparing the performance of a multi species seed mix to a ryegrass ley, grown alongside each other in two halves of one field.

“We sowed the seed in April and the multi species ley has been competing well against the ryegrass,’’ said Mr Rees, who grazes his spring-calving dairy herd from mid-February to mid-November

“It has had a flatter growth curve through the season but in dry periods like we experienced last summer I would expect it to keep growing for longer than the ryegrass because the plants are deep rooting.”

Multi species leys provide livestock with nutritional benefits not available in grass and they boost soil health, but selecting a mix that matches the livestock system is important.

During an open day at Moor Farm, independent grassland and soil specialist Chris Duller said there is no standard mix and he advises scrutinising mixes to ensure they fit the system.

Whilst diverse species can provide high levels of energy, protein and mineral status, dry matter (DM) can be low, he pointed out.

“Cows can do well on alternative species on a dry day but in wetter conditions you might find that they can’t physically eat enough to provide the protein and energy they need to perform,” he said.

They can also present challenges when measuring field covers.

“Red clover, plantain and chicory all grow at different heights so measuring covers to calculate growth rates can be problematic,” said Mr Duller.

He advised farmers not to over-graze these leys, especially in the autumn.

“With a conventional grass ley farmers will know to graze fields to 1500kgDM/ha but chicory, plantain and clover have crowns that can be damaged by over-grazing,” he said.

Attention to detail at the reseeding stage will result in better performing leys and good return on investment, he advised.

“Reseeding isn’t cheap, but if done well all your reseeding costs can be recovered in the first year of a new ley.”

Crucially, the seed bed conditions must be at an optimum - test the nutrient status of soils and ensure they are free of weeds and pests.

Brassicas have been used at Moor Farm as a pioneer break crop to help deliver these priorities.

The timing of reseeding is crucial – later in the season there are fewer the options for dealing with poor performance.

Weed control through grazing, cutting or topping becomes trickier in the autumn, and sprays can be less effective as temperatures drop and day length shortens.

“Yes, there can be more weeds if you reseed early on in the year but countering them is much easier,” said Mr Duller.

Choose the right seed mix for its intended use. Mr Duller said 75% of grass seed sown in the UK is a ‘cut and graze’ mix, considered by many farmers as a safe option.

But, he pointed out: “It can’t be brilliant at both so you get a mediocre result overall. Invest some time in studying the Recommended Grass and Clover List and pick the right balance of species and varieties to suit your conditions.”

“To get the best return on investment it is important that factors such as soil fertility are sorted out in advance,” she said.