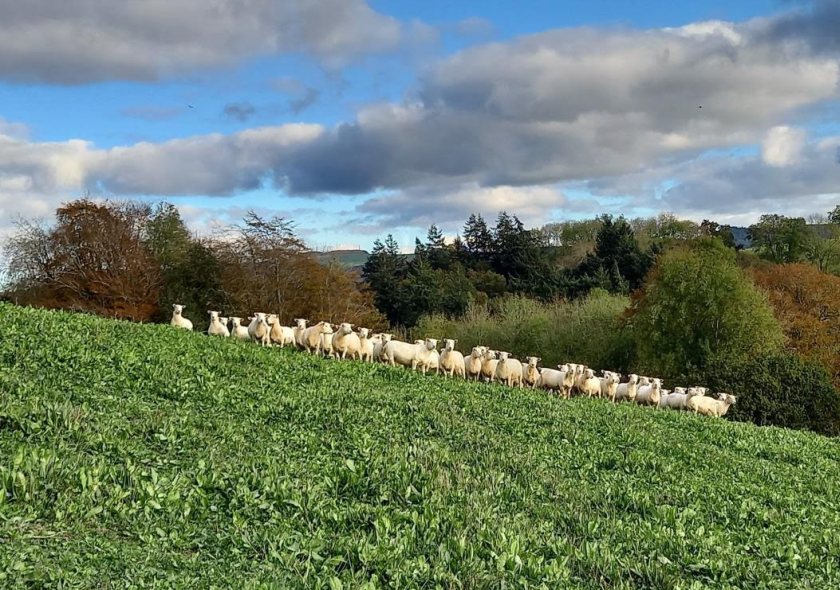 Farmers leading research into red clover are proving that the nitrogen-fixing plant can benefit farm businesses and the environment without impacting sheep fertility.

The four farmers, who are working with ADAS in an Innovative Farmers field lab, have found grazing ewes on herbal leys containing the legume can even have a positive effect on pregnancy rates.

The group hope to inspire others to reap the benefits from growing red clover by challenging and updating 50-year-old research from Australia and New Zealand.

This older research found fertility can be impacted when ewes are grazed exclusively on red clover, as the plant contains phyto-oestrogens.

But this winter these farmers, based in the West Midlands and Powys, grazed their sheep on herbal leys with an average of 17.6% red clover -resulting in positive rather than negative impacts.

Triallist Marc Jones, who farms sheep and beef cattle across 700 acres in Powys, said: “We’ve been putting ewes on leys with red clover for six or seven years now.

"And although we’ve never seen any negative impacts, we wanted to have some evidence to back it up."

He added: “A lot of farmers are hesitant about giving it a go, but the original research was done so long ago and with ewes grazing pure red clover, which is not how we use it.

“We’ve been able to prove that growing it alongside other herbs and legumes does have higher digestibility for the ewes, without impacting pregnancy scanning rates.

"It’s a good technique for flushing the sheep and for finishing lambs – and young cattle also do well on it.

“We do different tests and trials every year but putting some figures to it with research done on real farms makes a huge difference.”

The field lab involved selecting a group of ewes for the trial and splitting them into two halves.

Most triallists had already established red clover on farm, but one introduced it as a new sward in Summer 2021.

Gillian Preece, a sheep farmer and senior consultant at ADAS, who is coordinating the trial, said: “It’s clear to see there are no negative results from grazing ewes on red clover, and that farmers can have confidence in this practice.

“The ewes that mated on the red clover actually scanned higher – this was unexpected because we were setting out to prove no negative effect and what we ended up with was a positive effect.

“We want to encourage a wider uptake and less fear across the industry, especially as it’s such a good plant for nitrogen fixing.

“This field lab was great for spreading knowledge as the farmers didn’t know each other before and are geographically spread out, so they are all able to share findings with each other and then take it back to their local areas.”

She explained that the positive result will likely have been due to the sheep eating a more diverse diet as the herbal ley contained a variety of other plants including chicory, plantain, and wildflowers, which are good for nutrition.

As red clover is more effective at fixing nitrogen in soils than its relative white clover, it could also be a good option for farmers looking for alternatives to artificial fertiliser.

Mr Jones added that it’s also a good drought resistant crop: “We don’t get any Stewardship payments for red clover in Wales, so we are doing it purely for business purposes.

"The more red clover we can use the better – it’s helped us to really cut back on nitrogen costs and it’s also good for drought resistance.

“We farm in a dry spot which has the same average rainfall as Cambridge and it’s been really dry for the last four or five years – we’ve had to make some rapid changes.

"Red clover is deep rooting so it means our pastures hold up better and it’s giving us nitrogen at the same time.

“We started off with just 20 acres using red clover and have gradually increased it over the years, which has helped us to decrease that dependency on nitrogen.

Mrs Preece added that as red clover establishes quickly, farmers could sow it this spring and graze sheep on it as early as late June.

She explained that it can be incorporated into existing pasture or sown within a new grass or herbal ley to fix nitrogen following a previous arable crop or as a grass reseed.