Farmer praised for doing 'the right thing' after combine fire 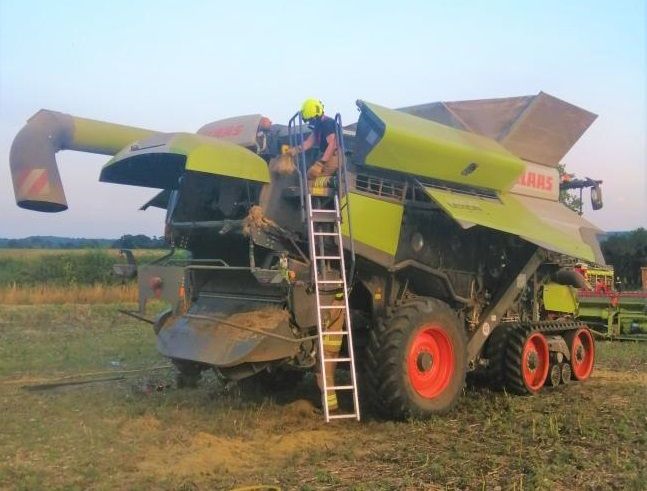 The farmer was praised by fire crews for doing 'exactly the right thing' in the situation (Photo: Oxfordshire Fire and Rescue Service)

An Oxfordshire farmer has been praised by firefighters for his quick thinking after his combine harvester caught fire.

Firefighters from Abingdon were called to their fourth incident of the day on Tuesday (11 August) when the combine burst into flames near Wallingford.

On arrival, the crews said they were faced with a 'small but deep-seated fire'.

Firefighters worked in arduous temperature conditions to access the seat of fire in order to resolve the incident.

Incident Commander Rod Dacombe, from Abingdon thanked the farmer for doing 'exactly the right thing' by calling the fire service and not tackling the fire himself.

"Their prompt call enabled our crews to safely resolve the incident and prevent significant damage to the vehicle," he said.

"It also meant that we weren’t facing a situation where the vehicle had set fire to the field/crop, which would have led to a very significant incident.”

Farmers have been urged to ensure all machinery is cleaned and serviced regularly to ensure there is no mechanical defects that could start fires.

Machinery owners should also store petrol, diesel, fuels and chemicals in clearly labelled approved containers, and separately and secure in locations away from other farm buildings.