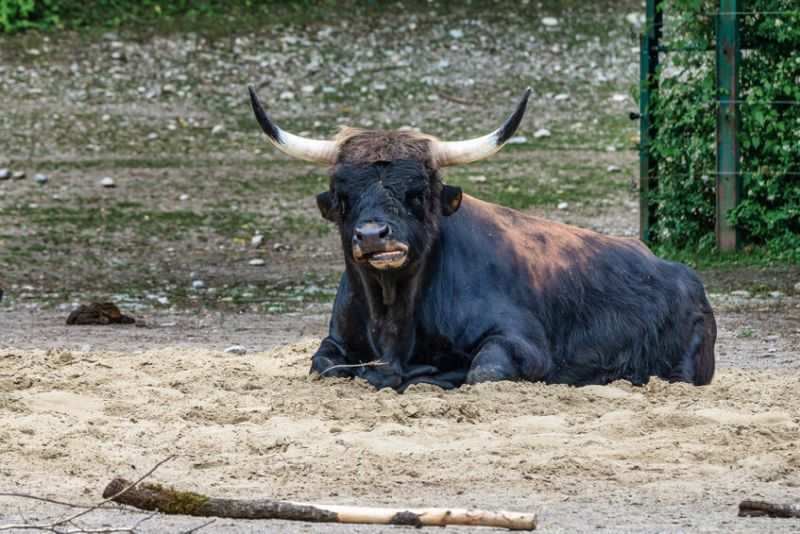 A Devon farmer worried about the loss of subsidies post-Brexit is transforming his farm back to its Stone Age state as part of an unusual diversification project.

Derek Gow is diversifying his farming business by offering customers safari tours of his highly-modified land.

The 115-acre plot in Lifton, north Devon, will host wildcats, wild boars and beavers in the nearby stream.

Most unusually, a hardy cattle breed engineered in the 1920s by Nazi German zoologist brothers Heinz and Lutz Heck will also feature.

Heck cattle are the result of an attempt by the brothers to breed back the aurochs that used to roam in European forests until they were brought to extinction in 1627.

Brexit has forced the 54-year-old's diversification plan to become a reality as he fears a loss of farming subsidies.

But he says his main reason is to reverse environmental-decline by boosting the local wildlife and habitat.

Mr Gow, who is also an ecologist, said British wildlife is 'slipping through our fingers' and the industry and government 'needs to act now' or else there is going to be 'nothing left very soon'.

He told The Daily Mail his business has had to look to a 'different future.

“Farming is losing money left, right and centre and the only thing that keeps it going is subsidies so we have to look at a different future and a different use of the landscape.

“We have taken 115 acres of our farm out of agricultural production, put up one big fence around it and allowed various groups of animals to start changing and modifying the habitat naturally.”

Mr Gow added that his land will eventually be like a 'foreign savannah the type seen in Africa and India'.

“From a commercial perspective we hope we can encourage people to come and see what we are doing.”

“It is going to be a peaceful place to stay and watch these wild animals through vehicle safaris and we will have hides to view the wildcats,” he said.

It comes as a report highlights how one in five farmers plan to diversify to make their businesses financially sustainable after the UK leaves the EU.