Farmer trapped in potato harvester to feature on TV series 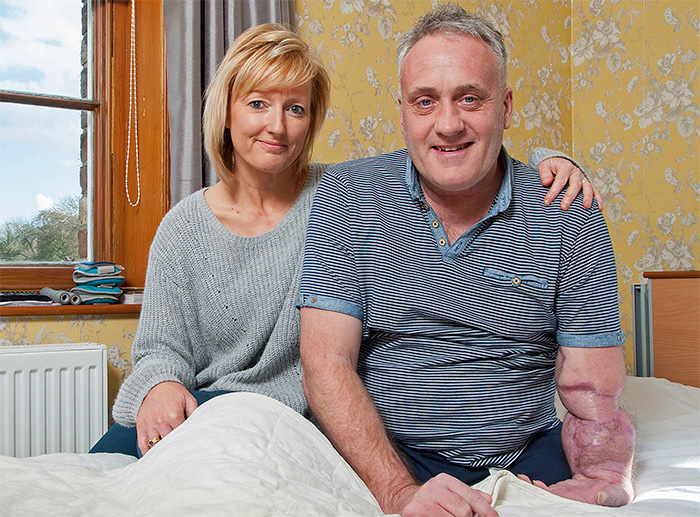 The story of a Yorkshire farmer who suffered devastating injuries when he became trapped in a potato harvester is being featured in two BBC series this month.

Darren Taylor is lucky to be alive after losing his left leg, the bottom of his right leg and suffering major arm injuries in the horrific accident at a farm near York.

The complex rescue operation to free the father-of-three will feature in the new series of Helicopter Heroes, which follows the work of the Yorkshire Air Ambulance, and on the popular Countryfile programme on Sunday, April 20.

Darren had been running the harvester in preparation for a morning’s work when he slipped and became caught in the machinery. “It only had my foot in to start with and I tried to pull it out with my left hand and then it took my hand and more of my leg.

“It was then starting to really hurt and I just was calling for help and trying to keep as much of me out of the machine as possible. It was about 20 minutes before someone came and switched the harvester off.”

Fire and Yorkshire Ambulance Service crews were joined by paramedics from the Yorkshire Air Ambulance including Graham Pemeberton who said: “The emergency services and the Grimme engineers worked fantastically well together to free Darren and we were then able to take him to Leeds General Infirmary in the quickest possible time where specialist doctors and consultants were waiting to treat him.

“He was remarkably calm throughout what was a long and complex rescue and Darren’s is certainly a job I will remember for the rest of my life.”

Firefighters struggled to work out how to get Darren out of the machinery and contacted specialist technicians from Grimme UK, based just a few miles away in Dunnington.

Mark Addinall, Grimme UK branch manager said: “We obviously work with these machines all year around and know how they come apart. When we got the call our guys rushed to the farm and worked very closely with the fire service and paramedics to get him out.

“As a result of this incident we are now working with the fire service to provide specialist training and . We are just delighted that Darren survived and I’m sure having the air ambulance there made a real difference to the outcome.”

When Darren was released he was flown by air ambulance to Leeds General Infirmary and placed in an induced coma for eight days while surgeons battled to save his life. Darren’s left leg was fully amputated, his left elbow removed and the bottom of his right leg amputated.

He spent three months in hospital returning to the family’s Glebe Farm home at Bolton Percy on New Year’s Day.

The 44-year-old has amazed doctors with his recovery and determination to be walking and working again. Darren, who has just returned to hospital for more surgery on his right leg and to try and restore some use of his left hand, said: “I have had one prosthetic leg fitted and I am hoping to be walking by early Summer and want to be back to work by the Autumn.

“I have lived and worked on farms all my life. There are times when it’s really tough to stay positive but we have this place and the children and I have had such amazing support from my family and friends; from everyone.

“I’m so grateful to the emergency services, the air ambulance, all the medical staff, the quick thinking Charles Hills who rang Grimme and the lads from Grimme for all they did for me.”

The motorsport fan received a major boost when a friend contacted American motorcyclying legend Kevin Schwantz, who rang Darren and then went to visit him, spending most of the day with the Taylor family.

Yorkshire Air Ambulance (YAA) is an independent rapid response charity, which has carried more than 5,400 people in its 13-year history. It needs to raise £9,990 each day to keep its two helicopters in the air and maintained - equivalent to £3.6 million each year.

Without any direct government funding, the only help the charity receives is through the secondment of its paramedics from the Yorkshire Ambulance Service NHS Trust.

You can watch Darren’s rescue on the first episode of the new series of Helicopter Heroes which will be shown on BBC1 on Monday, April 14 at 9.15am.