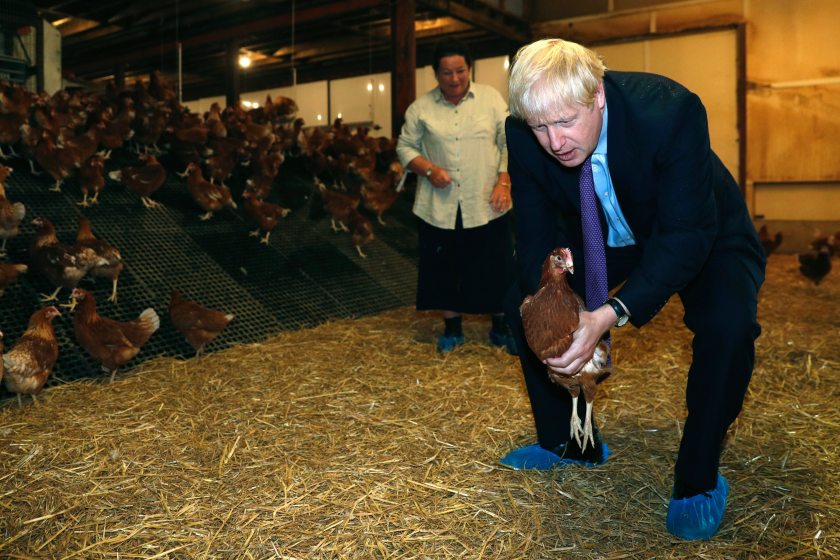 Boris Johnson on a visit to a poultry farm in Newport, Wales. Farmers have warned of the detrimental impact a no-deal would bring to the sector

News that the UK should ready itself for a 'no-deal' with the European Union is 'hugely concerning' for farmers, a union has said.

In a televised statement on Friday (16 October), the prime minister said the UK would have to prepare for a no-deal scenario on 1 January 2021.

Boris Johnson had set this week's EU summit as the deadline for the two sides to agree a deal.

But the prime minister's official spokesman said that trade talks were 'over': "The EU have effectively ended them when they said they did not want to change their negotiating position.”

Both sides had been hoping for a 'zero-tariff' trade arrangement once the UK's post-Brexit transition period comes to an end on 31 December 2020.

The UK will operate on World Trade Organisation (WTO) rules if no-deal is reached by then, meaning tariffs are imposed.

In this event, tariff safeguards would be removed for numerous farming sectors, including grains, eggs, fruit and vegetables and a number of dairy products.

Between 2013-17, 82% of the UK beef and 78% of the dairy/eggs and fruit and vegetables that were exported around the world went to the EU.

NFU Cymru said the importance of the EU export market to the UK farming industry 'could not be overstated'.

NFU Cymru President John Davies said: “News that the UK should ready itself for a ‘no deal’ is hugely concerning for farmers and the thousands of businesses whose livelihoods depend on the sector.

"Under a ‘no deal’ scenario agri-food products would attract eye-wateringly high tariffs, effectively pricing Welsh farmers out of their nearest and most lucrative export market."

Due to the transition period ending in just ten weeks, this would leave farming businesses with little time to prepare, particularly the farming industry, he said.

"It would mean farmers very shortly finding themselves operating in an incredibly difficult marketplace and one which would be completely at odds with what was promised by those advocating Brexit," Mr Davies added.

“Given the hugely detrimental effect a 'no deal' scenario would have on farming, it is absolutely vital that both the UK and EU continue to negotiate on a free trade agreement and prioritise securing a tariff-free, quota-free deal as soon as possible.”