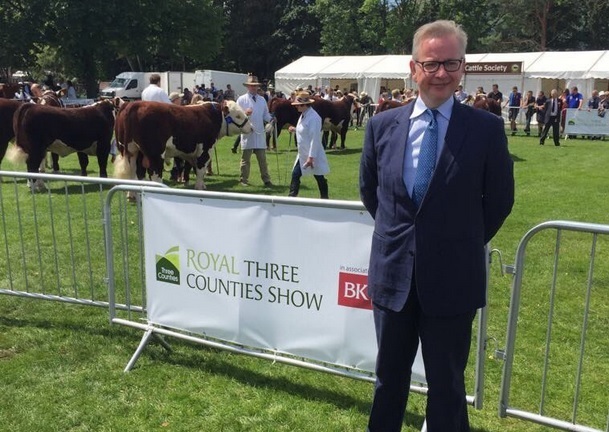 Future farm subsidies must be assessed on environmental and public benefits the land brings rather than simply how much land is owned, Defra secretary Michael Gove announced today.

In his first major speech since being appointed to the job last month, Mr Gove announced plans to scrap the current system when the UK leaves the EU as part of this 'Green Brexit' plan.

Mr Gove has already said British farmers, who receive £3bn worth of farm subsidies from the EU every year, will continue to receive the same level until the end of at least 2022.

"Payments are necessary because there is vital work to be done to manage soils and preserve the productive capacity of the land, to plant the trees we need, to clean and store water, to support the farming practices that make up our iconic landscapes or to make it possible for people to enjoy our beautiful natural spaces," the groups' president Ross Murray said.

But NFU's Vice President Guy Smith tweeted: "We are up for change Michael Gove, but remember most recipients of CAP payments are hard working family farms producing the nation's food."

Mr Gove delivered the speech to an audience at the WWF-UK headquarters in Woking this morning.

Hesaid: "Leaving the EU gives us a once in a lifetime opportunity to reform how we manage agriculture and fisheries, how we care for our land, our rivers and our seas, how we recast our ambition for our country’s environment, and the planet.

"The Common Agricultural Policy (CAP) rewards size of land-holding ahead of good environmental practice, puts resources in the hands of the already wealthy, and encourages patterns of land use which are wasteful of natural resources."

According to the Sunday Times, one in five of the 100 largest payments made under EU farming subsidies will be given to families on its 'Rich List'.

'Beauty in our lives'

Mr Gove said: "There are very good reasons why we should provide support for agriculture. Seventy per cent of our land is farmed - beautiful landscape has not happened by accident but has been actively managed.

"I am an environmentalist first because I care about the fate of fellow animals, I draw inspiration from nature and I believe we need beauty in our lives as much as we need food and shelter."

He said support for farmers will continue but that can only be argued for if the environmental benefits of that spending is clear.

Greenpeace UK policy adviser Rebecca Newsom told The Independent that Mr Gove has made 'a number of promising statements about reforming farm subsidies.'

"Michael Gove should use the Repeal Bill to enshrine policies, principles and real enforcement of rules to make sure Britain doesn't have weaker environmental standards than those enjoyed by our European neighbours.

"That's one concrete thing Gove can do to ensure we leave our environment in a better state for the next generation."