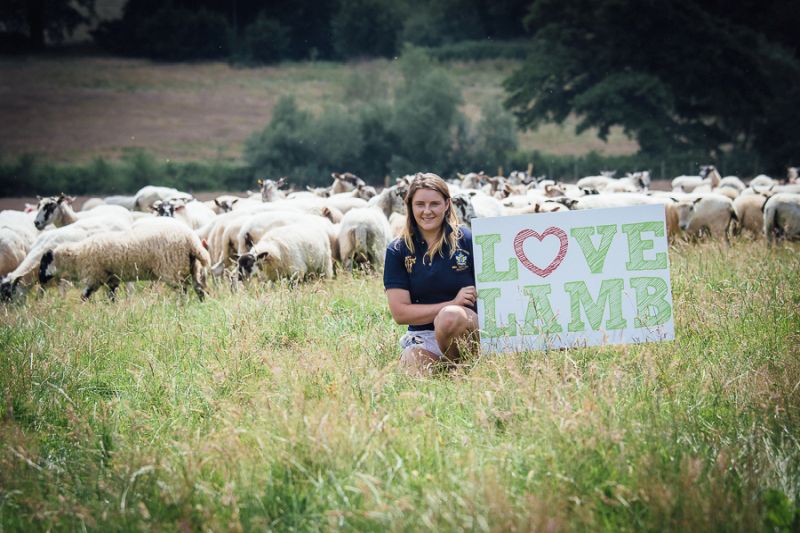 A £1.4m campaign which starts in September will see farmers across the country inspire the public to put lamb on their plates.

Using the tag ‘Lamb hits you in the chops’, it will begin at a time when British lamb is in peak supply.

The activity aims to stem the decline sales and boost consumer attitudes towards the meat.

Now in its fifth year, Love Lamb Week has grown to become an industry-wide initiative.

Groups such as the National Sheep Association, AHDB, NFU, Red Tractor, the Ulster Farmers’ Union and meat promotion bodies are all involved.

The call is now for producers, butchers, retailers and restaurants to save the date and join in efforts to boost British lamb.

24-year-old Coventry-based sheep farmer, Charlie Beaty, is getting behind the campaign.

Her family farm is a tenanted property in north Warwickshire that was taken on by her grandfather in the late 1950s.

It’s a typical mixed farm, which compromises of arable, beef and sheep enterprises.

Her family runs a flock of 300 breeding ewes, the majority of which are North Country Mules and are put to a Charollais tup.

The breeding ewes are the smallest enterprise on the farm, and are farmed to fit around the arable and cattle work.

The ewes and lambs she looks after are grazed over 200 acres of permanent pasture, alongside 20-30 cows and 30-40 beef stores.

The pasture receives minimal input and the majority of the lambs are finished on grass.

Charlie said she believes that better grassland management is the key to increasing the productivity of the flock at the lowest cost, and absorbing carbon from the environment.

She said: “Lamb has a taste unlike any other meat and that’s what makes it perfect for a variety of dishes, from curries through to a slow cooked roast.

“I hope farmers across the country will get involved in Love Lamb Week and inspire more people to put it on their plates.

“Not only does it taste great, it’s also a nutritious meat which is naturally rich in protein and provides vitamins which are good for health and wellbeing.”

The campaign and the Love Lamb Week runs from 1 to 7 September.